How to buy Litecoin (LTC) - Tutorial

Litecoin exists since 2011 and is basically based on the Bitcoin code. However, some significant changes have been made to make Litecoin the ideal digital payment method. We show you here where you can buy Litecoin and what you have to consider.

The head behind Litecoin is the programmer Charlie Lee, who first worked for Google and later moved to Coinbase. The fact that Charlie Lee worked at Coinbase for a while is seen by many as a reason why Litecoin was listed at Coinbase early on. Since then Litecoin has been one of the largest and best known crypto currencies worldwide. Often Litecoin is also called the little brother of Bitcoin.

To create Litecoin, Charlie Lee first took the Bitcoin code and slightly modified it. For example, Litecoin will have a maximum of 84 million coins and not just 21 million as Bitcoin. In addition, Litecoin will find a new block every 2.5 minutes, whereas Bitcoin only finds a new block every 10 minutes. Litecoin transactions can therefore be confirmed much faster. The idea of Litecoin is therefore that the crypto-currency should rather serve as a digital means of payment and Bitcoin, on the other hand, should rather serve as a store of value.

In the past, we have also seen that many changes that should come to Bitcoin (Lightning network, Atomic Swaps) were first implemented at Litecoin. Litecoin is therefore also something like the test environment for Bitcoin in the most remote sense. Many experts often refer to Bitcoin as digital gold and Litecoin as digital silver. By the way, another important difference is that Litecoin uses the Scrypt algorithm for mining. This should make it possible to mine Litecoin with normal computers and not only with special ASIC miners like Bitcoin.

Where can you buy LTC?

Besides the possibility of depositing Euros, you should also pay attention to how you can deposit the Euros. Some crypto exchanges only give you the possibility to transfer Euro credits to the exchange. Since transfers are however very slow, it can partly take a few days until the assets arrive. Faster is it if you can pay in the credits by credit card or PayPal at the respective crypto exchange. eToro for example gives you this possibility.

How to Buy Litecoin (LTC)

The easiest way to buy LTC is to use eToro. There you can choose between different payment methods (PayPal, credit card and instant bank transfer), as well as an easy-to-use platform with German support. At eToro you buy real crypto currencies which you can also withdraw with the eToro wallet.

eToro offers one of the easiest ways to get into the Litecoin trade with its user-friendly design. This provides a platform with special value for all investors who want to buy or sell LTC.

To trade on eToro you first need to log in to the platform. But this can be done without any problems. All you have to do is enter your name, email address and a password. After that you will get access to the eToro dashboard.

As eToro crypto currencies are traded against Euro you also need to verify your identity on the platform. 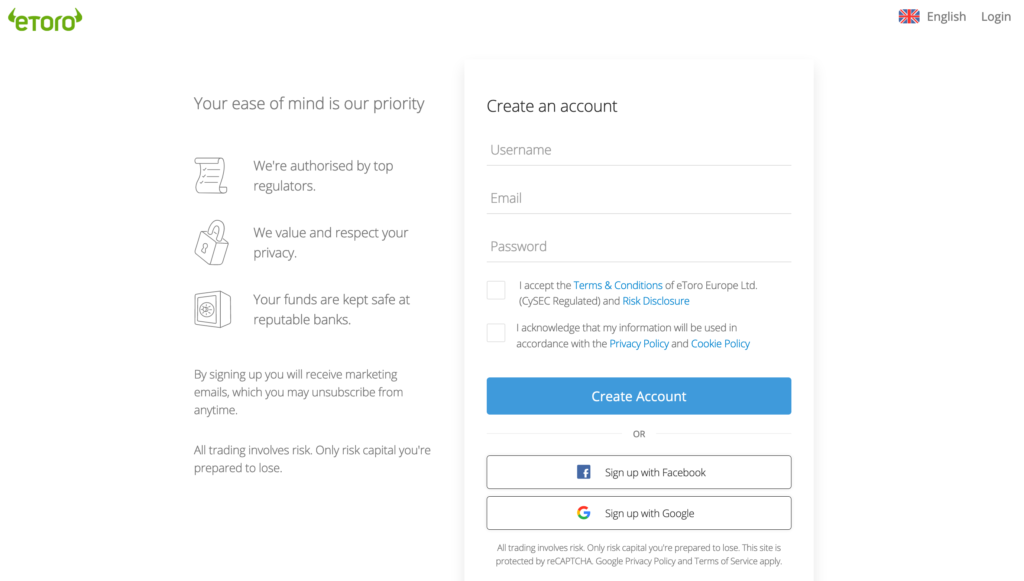 After opening an account you will also need to verify your identity with eToro. You will need to leave your personal information and upload a photo of your ID or passport. This process is required by European law for all platforms trading crypto currencies against Euro.

If you have provided all the information, the verification can still take a few days. It is advisable to make the deposit during this time, as you will be preferred during the verification process. But don’t worry, if something goes wrong during verification, you will get your money back. We have never experienced this kind of problem before.

As soon as the verification is complete you will be notified by email. If you have already made the deposit at this point, you can start trading immediately.

Buying and selling Litecoin at eToro is then quite easy. All you have to do is select LTC and click “Trade”.

A window will appear where you can buy LTC. All you have to do is indicate how many Euros or US Dollars you want to invest in LTC. You can also set a stop loss, trade with a leverage or enter a profit target.

With a Stop Loss you can determine at what loss your LTC should be sold automatically, thus reducing further losses if the price falls sharply. We do not recommend using leverage because it is very risky. Therefore you should always put X1 on the lever, then you will buy real LTC. You don’t need to specify the profit target either, because you can always close the trade manually if you have made enough profit.

Once you have entered everything, all you have to do is click on “Buy”. The trade will be executed immediately and you will see your newly acquired LTC in your portfolio. 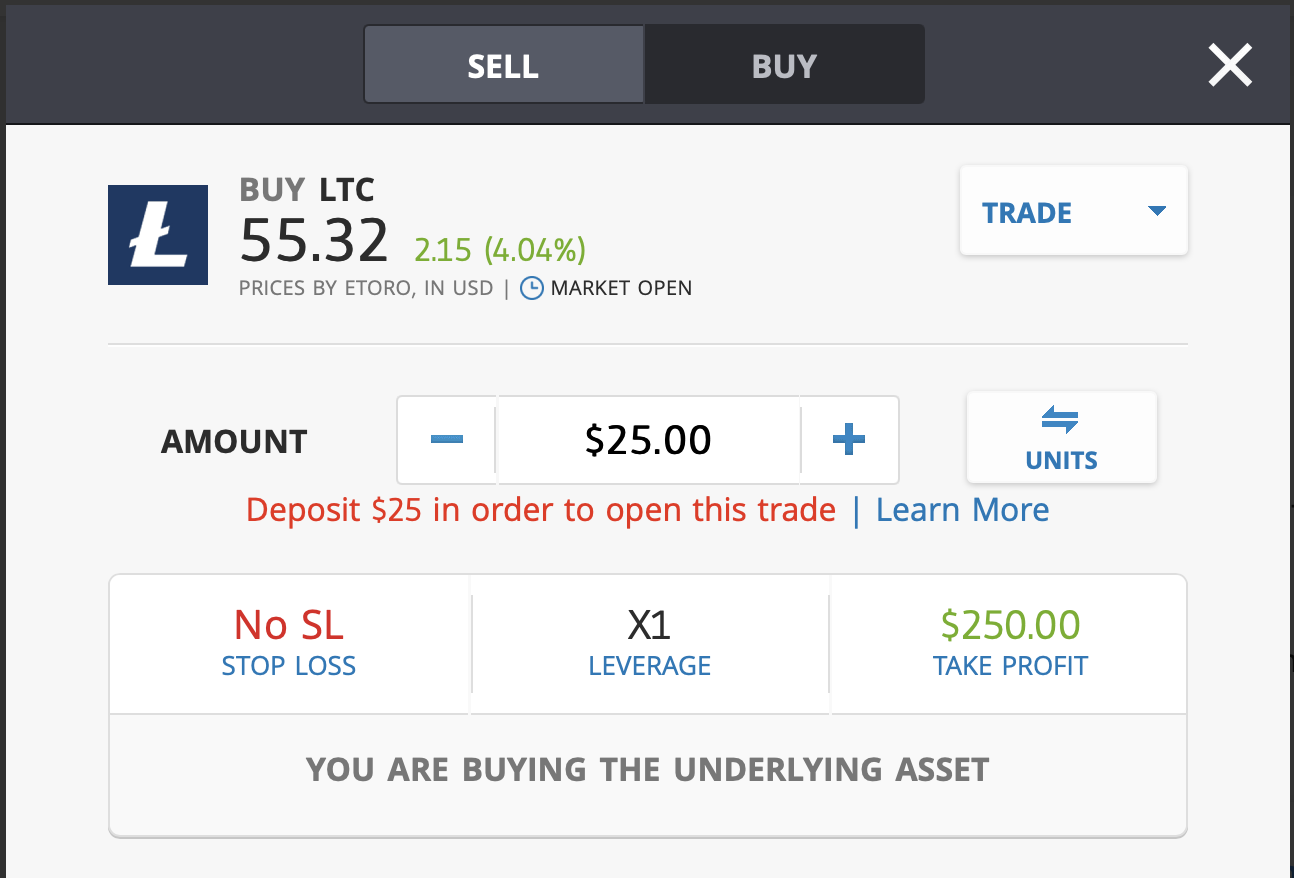 Withdraw cryptocurrencies with the eToro Wallet

In 2018 eToro introduced the so-called eToro Wallet. This is available for both Android and iOS. Now you can also use it to withdraw your crypto credits from eToro. All you have to do is install the wallet on your smartphone. You can then login to the wallet with your normal eToro login. 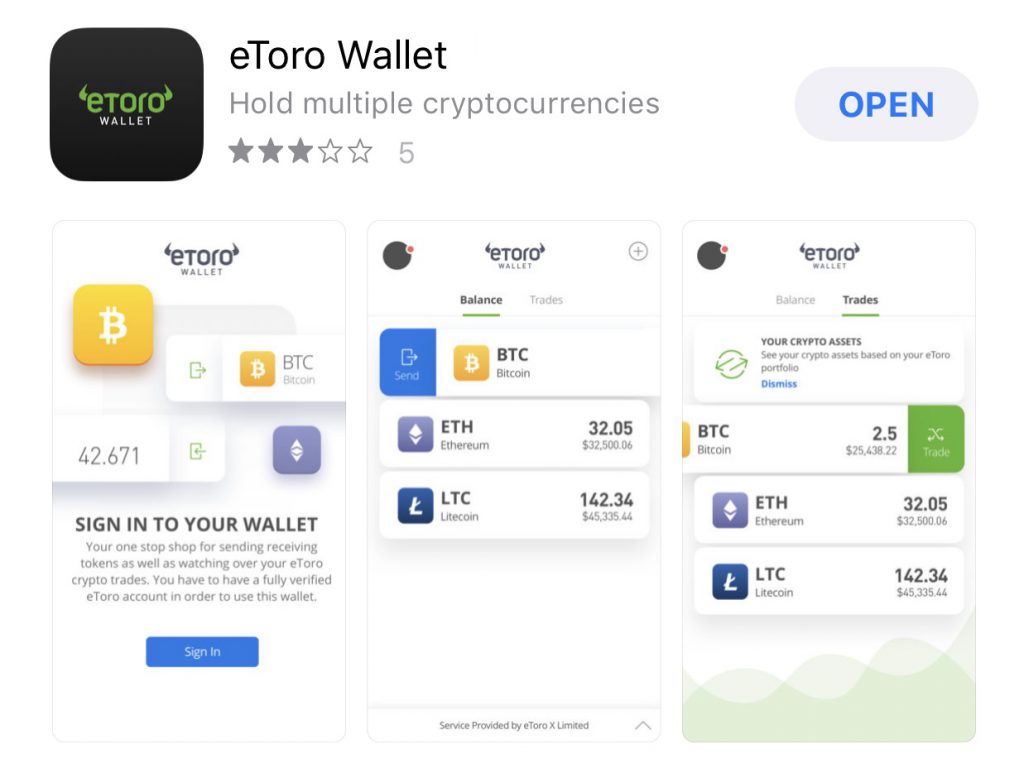 What payment methods are available to buy LTC

Credit cards are convenient and payment is available immediately!

Many people like to buy crypto currencies by credit card. This is usually because credit card payments are immediately available and buyers do not have to wait for the deposit to arrive.

Paypal has the advantage that you will be credited immediately and you have the buyer protection.

You can simply fund your eToro account via PayPal and then you can start trading and buy Cardano. This makes eToro the big exception compared to other crypto exchanges.

Another way to deposit money into your account in order to buy cryptocurrencies is via wire transfer. You don't pay any fees in order to deposit money. However the disadvantage is that it can take up to 2 business days until your money is finally in your account. If you want to avoid that you can use Rapid Transfer for instant wire transfers. If you are using eToro you can choose if you want to do a regular wire transfer or a Rapid Transfer.

Should I buy Litecoin now?

When is the right time to buy LTC? No one can predict. However, it is a fact that Litecoin has been established as one of the largest crypto currencies for years. Furthermore, crypto-currencies are just about to establish themselves. So we are still at the very beginning of the development.

The fact that Litecoin integrates many technologies even before Bitcoin and is thus technologically always a little bit ahead of Bitcoin, gives Litecoin an important right to exist also in the long run.

Is the technology the purchase argument for Litecoin

Technologically, Litecoin is ahead of the leading currency Bitcoin in many respects. Block chaining is more common (2.5 minutes compared to 10 minutes for BTC) and technologies such as the Lightning network or Atomic Swaps usually come first to Litecoin and later to Bitcoin. So it is not presumptuous to say that Litecoin is technically superior to Bitcoin.

But technology is not everything. Bitcoin is still the best known of all crypto-currencies and institutional providers in particular will always invest in Bitcoin first. Litecoin will therefore have a hard time stepping out of the shadow of Bitcoin. It is therefore much more appropriate to compare that Bitcoin is digital gold and Litecoin, as its little brother, is digital silver. The past has shown that the silver price can sometimes grow faster than the gold price.

Invest in Litecoin (LTC) or not?

If you should invest in Litecoin you have to decide yourself. In any case, Litecoin is not a Shitcoin that was created for an ICO, but a sustainable project. Technologically Litecoin is definitely an exciting project. An indicator for this is not least the fact that Litecoin has already existed since 2011.

When you buy Litecoin (LTC) you can either leave it at the exchange (eToro, Binance etc.) or you store it on your own wallet (depending on where you bought it). Basically there are 3 types of wallets you can use to store LTC. These are paper wallets, software wallets and hardware wallets.

With the so-called Paper Wallets you simply write your private key on a piece of paper. With this private key you can then access your credit. If you lose the sheet of paper or it is stolen, your credit will be lost. For normal investors Paper Wallets are not really practical.

Much better are the software wallets. You install it on your desktop computer or smartphone and can manage your assets. With a so-called recovery phrase (usually consisting of 24 words) you can restore your credit if you lose the device. If you want to use a software wallet, we recommend the official Trust Wallet for your smartphone. This is available for both iOS and Android. Alternatively there is also the official Litecoin Wallet. This is also available for your PC or Mac.

However, the safest way to store your Litecoins is a hardware wallet. The market leader for hardware wallets is the French company Ledger. We recommend you to use either the Ledger Nano S or the Ledger Nano X. Your private keys always remain on the wallet and cannot be stolen. Even if you lose the hardware wallet, you can still recover the credit via the recovery phrase. The ledger also supports the storage of Litecoin.

Litecoin is technically superior to Bitcoin in many respects and is often referred to as Litecoin’s little brother. The crypto currency has a right to exist in any case. The idea is ultimately that digital payments with Litecoin should be much better possible than with Bitcoin and that its big brother Bitcoin should rather serve as a value investment.

Whoever wants to invest in Litecoin should not invest all his money in Litecoin. It also makes sense to keep Bitcoin. Both crypto currencies complement each other very well. You can buy both Bitcoin and Litecoin at eToro simply against Euro.

Here you can find the current LTC price and see how the price has developed.