Polkadot (DOT) is probably the most eagerly awaited old coin of the crypto year 2020. The project had already attracted a lot of attention before its launch in August due to prominent founders and innovative concept. Here you can find out where you can buy polkadot and what else you should know about DOT. With our link to Binance you save another 10% in fees.

Polkadot already went public with a white paper at the end of 2016. In it, Ethereum co-founder Gavin Wood explained his idea of a block chain, which should connect foreign block chains that are actually technologically incompatible with each other. About a year later, an ICO raised around 144 million US dollars in Ethereum as seed capital, and work on Polkadot could begin. It should then take until August 18, 2020 for Polkadot to go live and DOT to be freely tradable.

Polkadot now creates the possibility to serve as a bridge between different block chains. This is especially important for use cases such as Smart Contracts and DApps, where users want to use the Ethereum ecosystem for example, but other crypto currencies such as Bitcoin are to be used.

Almost off the cuff, DOT as Polkadot’s native token made the leap into the top ten crypto currencies. Finally, a split into smaller units of DOT made for easier trading.

How to Buy Polkadot – Summary 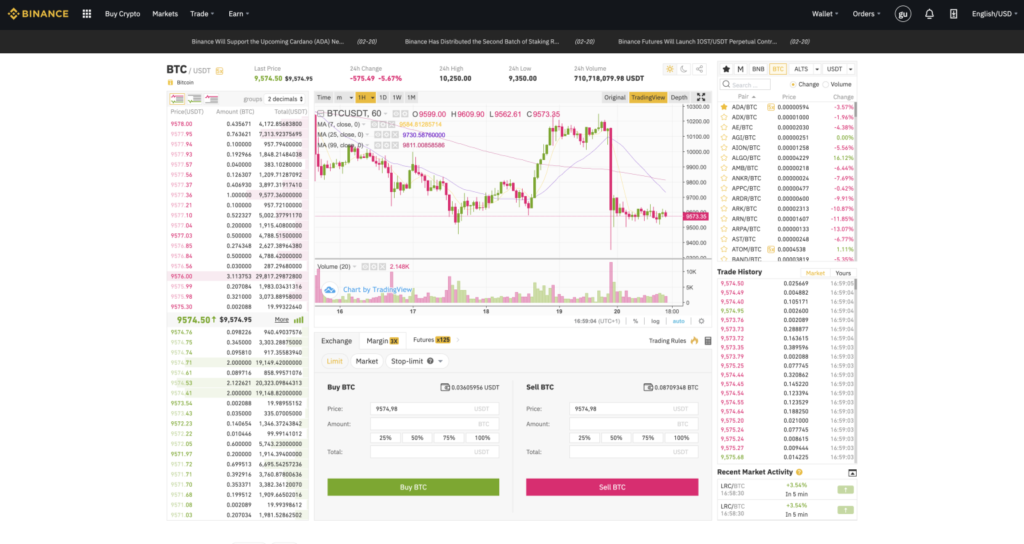 Polkadot (DOT) is already traded on many crypto exchanges. But there are good reasons to use Binance as the world’s leading crypto exchange for entry. Because there DOT meets large liquidity, which guarantees fair market prices. In addition, Binance will integrate staking for Polkadot in the future, more about this later.

How to buy Polkadot (DOT) from Binance

To be able to use Fiat or withdraw more than 2 Bitcoin (BTC) per day, a further verification (KYC, Know Your Customer) is required. This can also be easily done online at Binance. You will need your passport or ID card and proof of residence, such as current invoices or account statements. Confirmation is usually provided within a few hours.

What are the payment methods to buy Polkadot?

Now you are ready to purchase Polkadot (DOT) from Binance. There are basically three methods available for this, namely deposits from a bank account, credit card or in other crypto-currencies.

Of course, Binance also allows credit balances to be deposited using standard credit cards. The advantage here is that your euros are immediately credited to your account with Binance. The disadvantage is that you will have to pay a fee of three percent for this service.

For beginners, transferring euros from their private account to Binance is usually the best option for buying polkadot (DOT). The advantage is that the fees are very inexpensive at EUR 0.50 per deposit. The disadvantage: It can take up to two working days before your deposit is credited to Binance.

If you have some experience with crypto currencies, you probably also have credits in Bitcoin (BTC) or Altcoins. You can simply deposit them into your account at Binance, simply scan a QR code for the destination address and enter the amount. Binance will inform you as soon as the transfer is complete. The advantage: verification via KYC is not necessary.

Purchase of DOT from Binance

As soon as you have funds in your account with Binance, you can already buy polkadot. To do so, select “Markets” in the top line and then enter Polkadot or DOT in the search field. You will then see which crypto currencies DOT is traded against at Binance. Currently (September 2020) Binance does not yet offer the possibility to buy polkadot directly against Euro.

Therefore you may have to buy Bitcoin for your Euro under the tab “FIAT Markets” and use this BTC to buy Polkadot.
By clicking on “Trade” at DOT/BTC you will be redirected to the actual exchange. There you will see the price curve of Polkadot, the order book and under the charts the input field for your purchase. There you enter how many DOT you want to buy and the current market price is displayed in Bitcoin.

Without any further input, you will then buy DOT at the current market price for BTC. If you set a “Limit Order”, the purchase will not be initiated until the price from Polkadot to BTC reaches the value you set.

Sale of DOT at Binance

The sale of your polkadot is basically the same as the purchase. Choose a currency pair, enter the amount, accept the market price or place a “limit order” – done. Once the trade is completed, you can cash out your Bitcoins or exchange them for Euros. As a verified customer you can then have the Euro transferred back to your bank account.

You can find a video how you can buy and sell Polkadot here.

Should I buy Polkadot (DOT) now?

Polkadot has made a dream start and has temporarily tripled the price of DOT since its free initial listing. Whether the potential of Polkadot is already fully priced in in September 2020 and the risk of a bubble forming in the event of further price gains is difficult to assess.

The fact that the Polkadot project has taken up an already existing problem in the crypto industry speaks in favor of DOT. The solution works and is already used in more than 200, widely diversified applications. These reach into the DApps fields as intended and could also score in the strongly growing DeFi division.
Polkadot’s Achilles’ heel could be that DOT mutates too much into an object of speculation. Future decisions for Polkadot will now be made by network participants who hold DOT. Whether they will always master the balancing act between technological development and seductive profit-taking remains open.

Which wallet to use for Polkadot (DOT)?

Polkadot (DOT), as a young crypto currency, is unfortunately not yet integrated into all common wallets. With the hardware wallets, the market leaders of Ledger and Trezor are working hard to make their devices compatible for the safe storage of DOT.

Until this is implemented, you have to switch to a software wallet to secure your DOT. A list of all available options can be found here. According to experience reports, the Polkawallet as an app, for example, combines user-friendliness and security convincingly and also handles staking for DOT automatically.
The latter also speaks for keeping your DOT with Binance for the time being. They are currently integrating Staking for Polkadot and will automatically reward you with Staking Rewards as a reward for keeping DOT.

Polkadot’s protocol is based on Proof-of-Stake (PoS) and therefore includes the possibility of earning DOT by staking. The idea behind staking is that by temporarily providing DOT in the Polkadot block chain, its performance is increased. Staking Rewards are paid out for this.

The option of earning Staking Rewards at Polkadot by operating a separate node is technologically complicated. For this reason, it makes sense to delegate DOT for staking to service providers. A list of such providers can be found here. If you choose one of them here to benefit from staking at Polkadot, make sure you check the volume and reliability of the providers. Staking means that you give up control of your DOT for a while.

That’s why we recommend to stay with Binance for staking at Polkadot, even if there are still some days or months of waiting until implementation. Then you don’t have to do anything with Binance – DOT on your account will be staked automatically and by a fair and reputable provider.

Polkadot seems to be well on the way to becoming the leading solution in the task of making block chains compatible with each other. This challenge is not a theoretical one, but Polkadot is actively demanded and used in the crypto industry for exactly this reason. DOT as a native crypto currency has good chances in this field to develop positively in the price in the medium and long term.