With DUSD, Julian Hosp has created an algorithmic stable coin that is on the verge of collapse and will leave many disappointed investors behind.

Those who have invested in Julian Hosp’s projects in the past have mostly lost the majority of their investment. This initially included Lyoness. This is a pyramid scheme that Julian Hosp has advertised on a large scale. If you want you can watch one of his videos (how he tries to convince potential investors) here. Needless to say that in the end many investors lost their money. Julian Hosp has at some point renounced Lyoness but has earned princely on the system as he tells in the video.

After the debacle with Lyoness, Julian Hosp was part of TenX. Here, too, many questionable actions have run. For example, in the past we could show that many of his PAY tokens were sold at questionable times. TenX no longer exists in that form today, and the PAY Token is now worthless as well. It has even been revealed that one of the founders of TenX was behind the DAO Ethereum hack as Laura Shin shows in her recent book “The Cryptopians”. There is no trace of the former TenX leadership alongside Julian Hosp today.

Julian Hosp’s current project is called DeFiChain. As the name suggests, it is intended to create a crypto ecosystem that fully relies on DeFi (Decentralized Finance). The fascinating thing is that Julian Hosp has once again managed to attract numerous investors. Even investors who have already lost money with him at TenX are now partially reinvested in DeFiChain. The project also has its own token under the name DFI, which was worth over 2.3 billion US dollars at its peak. Anyone who has ever tried to use DeFiChain quickly realizes how bad the system is. It’s not very intuitive to use and is really just a bunch of crap that was somehow cobbled together. I’ll spare you the details here to keep my blood pressure from going through the roof.

DUSD is a different story. In the past few weeks, we’ve seen the price of DUSD drop below $0.70 US at times. As a result, there were numerous rescue attempts to restore the so-called Peg (1DUSD=1USD). 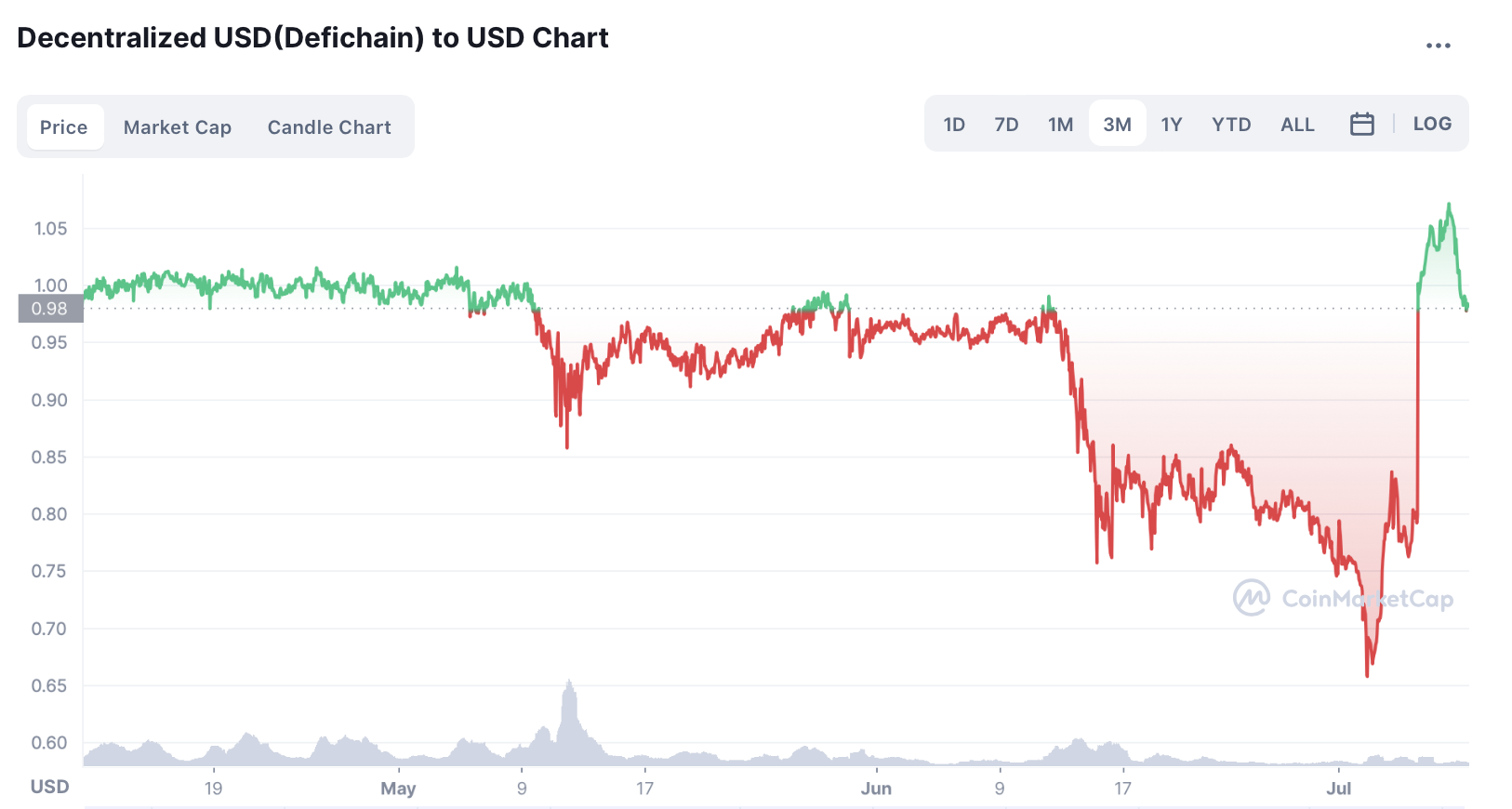 As can be seen from the price of currently over 1 US dollar, this has also succeeded. However, investors are paying a high price for this. Because who wants to exchange his DUSD into another currency currently pays 30%(!) fees. De facto, the DUSD is still only worth 70 cents. All this is of course not the idea of DeFi. Since DUSD is not traded anywhere except on their own platform, these fees cannot be avoided. It becomes really problematic when we look at how high DUSD is hedged. Because currently DUSD has only a so-called collateral of about 5% (far below that of Terra UST back then). That means if all investors exchange their DUSD at the same time, they are left with only 5% of their investment. The real phenomenon is that investors here still trust Julian Hosp and there has not yet been a so-called “bank run”. But also here the voices become more critical. According to everything we currently know and have learned, the whole system must collapse at some point. The team of DeFiChain itself talks about the fact that they want to have 50% of DUSD hedged at some point. But even that should not be enough by far. A collapse seems preprogrammed here.

Besides DFI un DUSD, DeFiChain has many other tokens that have been created. For example, attempts were made to map well-known stocks as tokens. These include Tesla (DTSLA) and Apple. Almost needless to mention that the system again fails to create a so-called peg at the original price of the stock.

All in all, it is amazing that Julian Hosp has managed to delay the collapse so far. Who looks at the visits of the web page of DeFiChain will determine that also this time again many investors from Germany will earn their money. Because a large part of the investors of DFI, DUSD and Co. comes again from Germany, Austria and Switzerland.

By the way, the biggest joke is that there is a blog post on the DeFiChain site explaining why DUSD cannot be compared with Terra Luna UST. It states that Terra Luna UST had only one real use case (with Anchor where users got almost 20% interest when they invested their UST there). In contrast, DUSD is stated to have significantly more use cases. But what is completely ignored is the fact that it does not matter that there are more use cases if they are always the same users. Because DUSD is only used by the investors in the DeFiChain system.