Advertising works with memorable symbols – building a brand like Apple, Nike or Amazon therefore requires distinctive logos that at least reflect the core of the product range. When it comes to the theme of national currencies, “$” for the US dollar or “EUR” for the euro have become engraved in the collective memory. And even Bitcoin inventor Satoshi Nakamoto thought back in 2009 about which logo or symbol would suit his decentralized digital currency best. From archived chats in a Bitcoin forum, it can be reconstructed that Satoshi, who remained anonymous, himself appeared as the designer of a symbol for BTC. In 2009, Satoshi still propagated “BC” as an abbreviation for Bitcoin, embossed in capital letters on a virtual golden coin.

In 2010, Satoshi proposed an update to the Bitcoin logo. Based on the US dollar and the Thai baht, this resulted in the “B” for BTC with two vertical stripes running through it.

This Bitcoin symbol is still sometimes used today to illustrate BTC. But even more often, a slightly tilted “B” on an orange background is used, extended with two stripes at the top and bottom. Everyone knows this picture for Bitcoin: 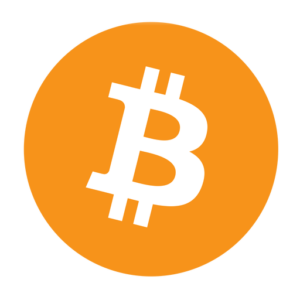 A certain Bitboy has brought this logo into circulation, also in the Bitcoin Forum in November 2010. Bitboy’s identity remains unclear to this day, but its logo for Bitcoin has prevailed. Whether in advertising for crypto exchanges or as a sign for payments via BTC, whether as a symbol photo or as a logo for crypto currencies in general – we encounter the weird “B” on orange every day.

Does the Bitcoin logo need a new design?

Of course, there are dissatisfied voices that express a need for improvement or renewal for the now common BTC symbol. The slant of the “B” does not inspire confidence, is one objection. Others are critical of the proximity to the dollar symbol ($), some simply don’t like the color. But on the other hand: Google and Apple have already integrated the common Bitcoin “B” into their emoji keyboards, and Twitter also supports the icon. This Bitcoin logo has established itself in a quasi decentralized way, so there are few arguments to change anything about it. Rather, proponents of BTC would like to see a key for Bitcoin on hardware keyboards and thus be on a par with other major currencies.

Conclusion: Bitcoin and the question of visual perception

If you like, you can dismiss the discussion about the BTC logo as “nerdy”. But market research and psychologists know how a successful visual symbol influences decisions. It is already somewhat “spooky” with Bitcoin, where Satoshi apparently did not only have time for whitepapers and programming the block chain for Bitcoin. This Satoshi himself probably sat at the computer to arrange pixels for a BTC symbol, knowing the power of images.

Bitboy also remained anonymous and sees his Bitcoin “B” white on orange probably every day, sometimes copied 1:1 from his designs, sometimes varied. So let’s wait until keyboards, calculators and other electrical devices quite naturally have a key for Bitcoin. Major brands know why a logo is at best renewed very carefully. With BTC as a decentralized currency, there is no authority that could officially decide on the symbol. In this respect, the current solution with its actually bizarre history fits well with the basic idea of Bitcoin.