Parallel to the price explosion of Bitcoin (BTC), Dogecoin is also experiencing a spectacular situation. The price of DOGE is rising to record levels and more and more prominent supporters are gathering behind Dogecoin.

What do Tesla CEO Elon Musk, rap star Snoop Dogg and Kiss guitarist Gene Simmons have in common? They all publicly show themselves as fans of Dogecoin (DOGE) and thus help the cryptocurrency, which is often ridiculed as a fun coin, to gain more popularity including a positive price curve. In bare figures, DOGE has increased by a good 130 percent in the past seven days, making even Bitcoin (plus 40 percent) look pale. Dogecoin generates its very own headlines, most recently in connection with the Wall Street rebels of #WallStreetBets. 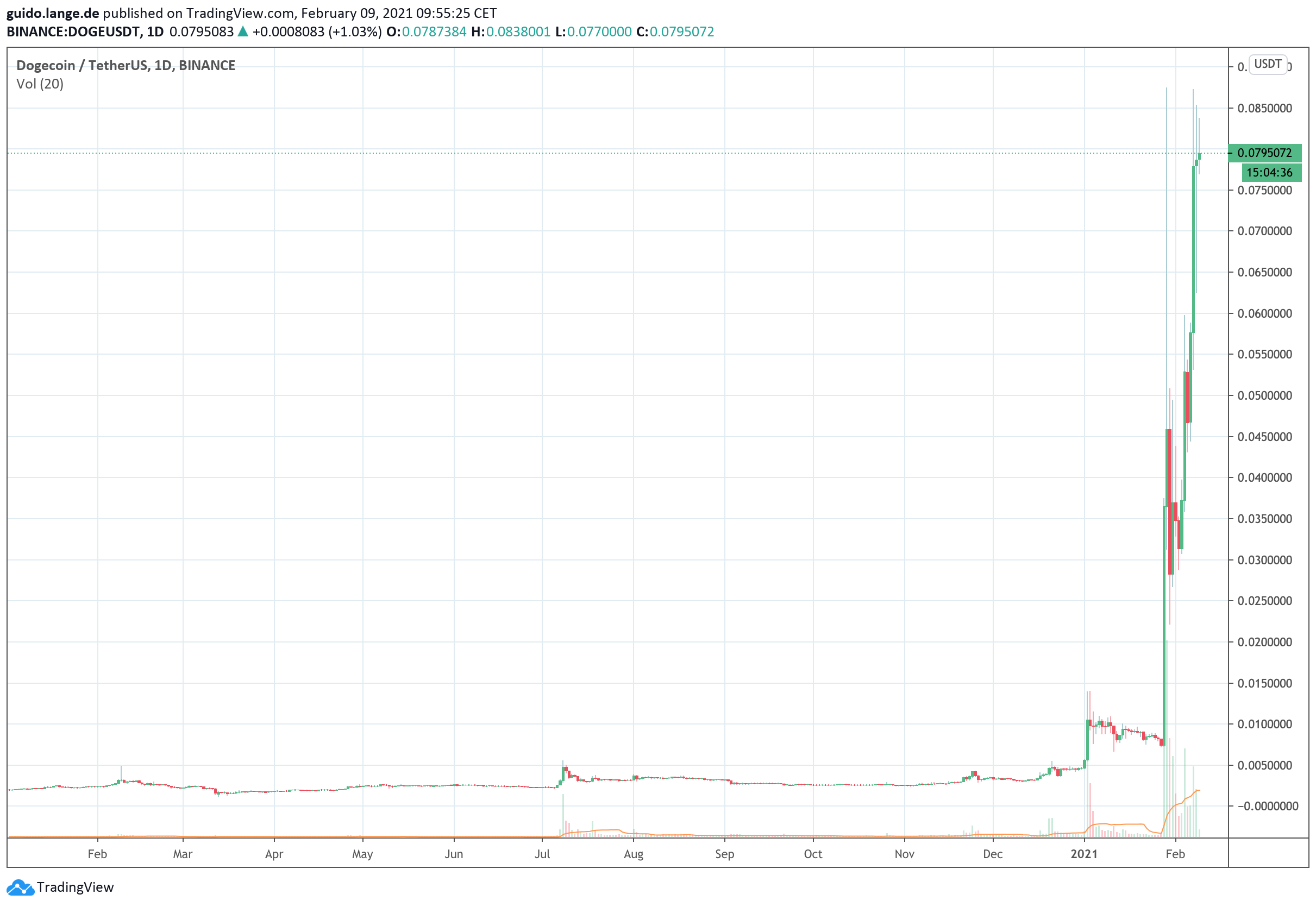 It often seemed rather facetious when the much acclaimed Tesla CEO Elon Musk advocated Dogecoin in the past. After all, DOGE has essentially no presentable real-life use cases and was originally envisioned as a token that people could use to playfully experience the principle of cryptocurrencies. But by the time Musk recommended Dogecoin to his more than 46 million on Twitter in line with WallStreetBets, the picture was getting more serious. Then, at the weekend, Musk put out a call via Twitter for people to vote on the currency of the future. The choice was Dogecoin or “all other cryptocurrencies united.” With 71 percent, the more than 2.4 million participants voted for Dogecoin.

Around the same time, Snoop Dogg revealed himself to his 20 million followers on Twitter as a “leg-hugging” Snoop DOGE. And Gene Simmons from the legendary Kiss has “only” 1 million fans on Twitter, but he has also been playing them with Dogecoin for days. The whole spectacle culminated now provisionally in a photo montage made by Elon Musk, where the three celebrities lift the sweet Shiba dog as a symbol for DOGE towards the moon. Musk, meanwhile, doesn’t even try to capture the hype around Dogecoin anymore, but shows – on Twitter, of course – what the moon ride of this altcoin could look like.

So … it’s finally come to this … pic.twitter.com/Gf0Rg2QOaF

Conclusion: will DOGE become a cryptocurrency to be taken seriously?

So Dogecoin is on everyone’s lips now, and it would truly be no surprise if more celebrities join the trend. And with a price of around $0.08 and the market capitalization of just over $10 billion, DOGE is one of the winners of the hour and seems to be settling into the TOP 10 of the most important cryptocurrencies.

But investors should be wary: The maximum amount of DOGE is not limited in the protocol, so Dogecoin does not have an inflation brake. Moreover, only the acceptance of DOGE as a means of payment by major online retailers would likely bring real use cases. But for short-term thinking crypto traders, Dogecoin currently offers opportunities; after all, DOGE can also be bought against euros on Binance, for example, and traded in other currency pairs with leverage.

Dogecoin is traded on Binance. Open a Binance Account here and save 10% on fees for a lifetime.