Thunderclap at IOTA: The foundation has dismissed its chairman David Sønstebø from office. The supervisory board decided this unanimously and with immediate effect. IOTA co-founder Sønstebø has long been under criticism.

At IOTA, the blessing of the house is more than just wrong just before Christmas. The chairman David Sønstebø was fired at the IOTA Foundation. In an official announcement it is written that the Board of Directors has unanimously come to the conclusion that the interests of David Sønstebø and the IOTA Foundation have developed significantly apart. Sønstebø’s name has already been removed from the list of IOTA’s leaders. David Sønstebø had been one of the four co-founders of IOTA in 2015 and had appeared in public mostly as a spokesperson for the project. He did not comment on the decision at first.

As recently as October, for example, Sønstebø had advertised for IOTA during a video question and answer session, predicted a successful 2021, and overall appeared quite optimistic. The IOTA Foundation bade him farewell with the usual phrases like “he will be a founder of IOTA forever” and “we acknowledge what he has done for our organization”. The letter shows that the Board of Directors of the IOTA Foundation considers the decision of the Supervisory Board to be correct and supports it.

Sønstebø often seemed to be a kind of sole ruler of IOTA and at least on the Board of Directors he had long been a powerhouse through the other two co-founders Dominik Schiener and Serguei Popov. When the fourth founder, Sergey Ivancheglo (Come-from-Beyond/CFB), left IOTA as early as 2019 and later had a financial dispute with Sønstebø, the foundation always stood behind its chairman.

One of the first who was now openly pleased about Sønstebø’s expulsion is the self-declared IOTA scout “Hund”. He had started in May to systematically investigate irregularities at IOTA. The withdrawal from Sønstebø was already then seen by “Hund” as inevitable and was followed up with figures in the summer. “Hund” still points out that Sønstebø still controls at least 4.95 percent of all IOTA, which investors may view critically.

“Hund” remains anonymous and his revelations were doubted in parts of the IOTA community. On the other hand, unbiased experts have so far not found any errors in “Hund’s” research. Now he is shooting himself again via Twitter at Dominik Schiener, who is one of the founders of IOTA and who, as co-chairman of the foundation, should initially lead the organization. In Schiener’s case, “Hund” criticizes the alleged past as a hacker, unethical behavior and lack of experience.

Meanwhile, Sønstebø seems to have stumbled across a mixture of mismanagement, dubious cash flows and impulsive behavior. Documented is faecal language, a dubious handling of funds, also described by early investors, as well as recurrent delays in important IOTA projects such as the switch to a decentralized Tanglenet called Coordicide. 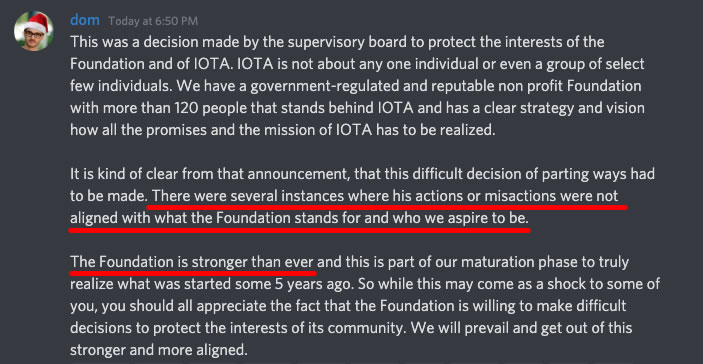 Conclusion: A liberating blow at IOTA or the beginning of the end?

The news of the disagreement between IOTA and Sønstebø sent MIOTA more than 8 percent into the red. To make such a serious personnel decision like the one about Sønstebø without having a successor immediately at hand does not seem very professional. And it remains to be seen whether the IOTA Foundation will be able to get rid of financial burdens. The reference to the importance of the IOTA Foundation at least indicates that there may still be some unpleasantness there. Indications of serious financial difficulties at the IOTA Foundation are still in the air, even though the crypto agency Weiss Crypto Rating withdrew its warning at the intervention of Sønstebø. Some experts also believe that IOTA Foundation’s non-profit status may be in danger because of its financial behaviour.

Thus, the bang at the IOTA Foundation, from which the extremely self-confident Sønstebø emerges as a loser, may at first glance seem like a liberation for the project. But the race to catch up to IOTA 2.0, marked by Chrysalis and Coordicide, is far from over, and whether the IOTA Foundation will really be able to emerge from the negative headlines in the long term remains to be seen. It is hard to imagine that Sønstebø is silent.