Bitcoin miners may play a more important role in the day-to-day pricing of BTC than is sometimes assumed. Experts come to this conclusion through data analysis.

Bitcoin Halving of May was not the first to train the eyes of BTC investors to keep an eye on the behavior of the miners. Where are the critical price limits for miners at which their business is no longer worthwhile? Are mining pools at BTC getting out of the game in order to dig for potentially more profitable altoins? When do the miners actually sell their BTC exactly? Questions like these are a piece of the puzzle in the search for the answer to where Bitcoin is heading.

Bitcoin Miners and the overall market for BTC

On most days it is mining pools such as F2Pool, Poolin or Antpool that make up the bulk of Bitcoin’s inputs to the crypto exchanges. Between 30 and 40 percent is their share. Between 10 and 20 percent each of the BTC sold on the crypto exchanges in day-to-day business comes from private wallets and from companies that accept BTC as a means of payment. The majority of incoming Bitcoin at crypto exchanges comes from other exchanges, where speculation about price differences is common.

Miners have high operating costs and are therefore dependent on a steady cash flow. Since their costs usually have to be paid in Fiat, they are also little interested in speculation with currency pairs from BTC to Altcoins such as Ethereum (ETH). The Miners Rolling Inventory (MRI) is the appropriate indicator to determine when Miners will bring their Bitcoin onto the market. It measures whether Miners are building up or reducing stocks. 100 percent MRI means that they sell exactly the same amount of BTC as they mine. At lower MRI values, miners sell more Bitcoin than they mine, but the reverse is true for an MRI of more than 100 percent. Bytetree allows the MRI of Bitcoin to be followed in real time. 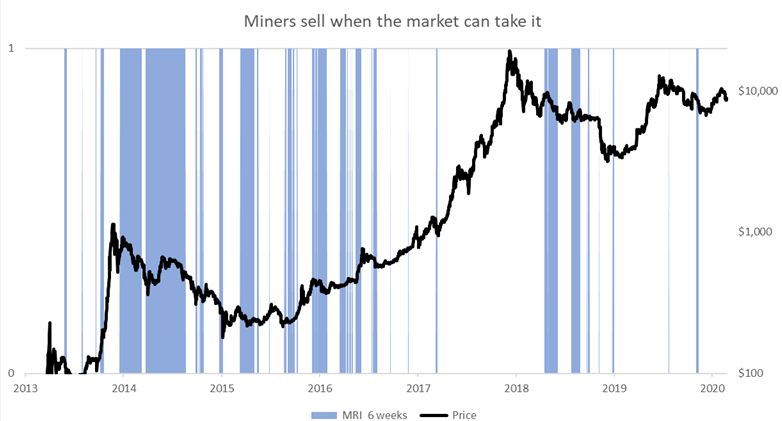 Anyone who follows the MRI for days on end quickly notices that the simple assumption that miners wait for higher prices until they sell their BTC is not true. Even on days when the BTC price drops significantly, miners sometimes sell more BTC than they mine. Instead, the decisive factor for them seems to be whether there are enough buy orders at all, i.e. whether the market can absorb their new BTC. In this respect, the trend in 2020 is positive, the Miners are putting their BTCs into circulation against Fiat, and the MRI of the last 12 weeks is still over 100 percent, but is falling steadily overall.

How the MRI is to be interpreted exactly is like a question of conscience. However, it currently proves that miners are experiencing the Bitcoin market as one that willingly accepts their valuable block awards, by 900 Bitcoin a day after halving. Some experts see this as an indication of a coming bull market. Others point to the thesis that large mining pools will sell BTC at bad prices if necessary to force smaller miners out of the market. In any case, it is worthwhile for you as an investor not to underestimate the MRI for price forecasts, because the miners are the driving force in the “new business” with Bitcoin.