It may sound like a bold thesis, but there are also strong indications that China has taken control of the Bitcoin (BTC) ecosystem. Is this true at all, and what impact could it have?

Bitcoin (BTC) as the first and most famous crypto currency in the world has long since reached the status where theories of all kinds are rampant in the environment. One of them is that BTC can no longer fulfill its promise of decentralization and the associated protection from targeted influences because China plays the dominant role in Bitcoin. Anyone who spreads such a thing usually puts forward two weighty arguments:

1. the hashrate of Bitcoin is dominated by miners based in China. For example, an interactive map of the Centre for Alternative Finance Cambridge supports this statement, which is undisputed in terms of the facts: 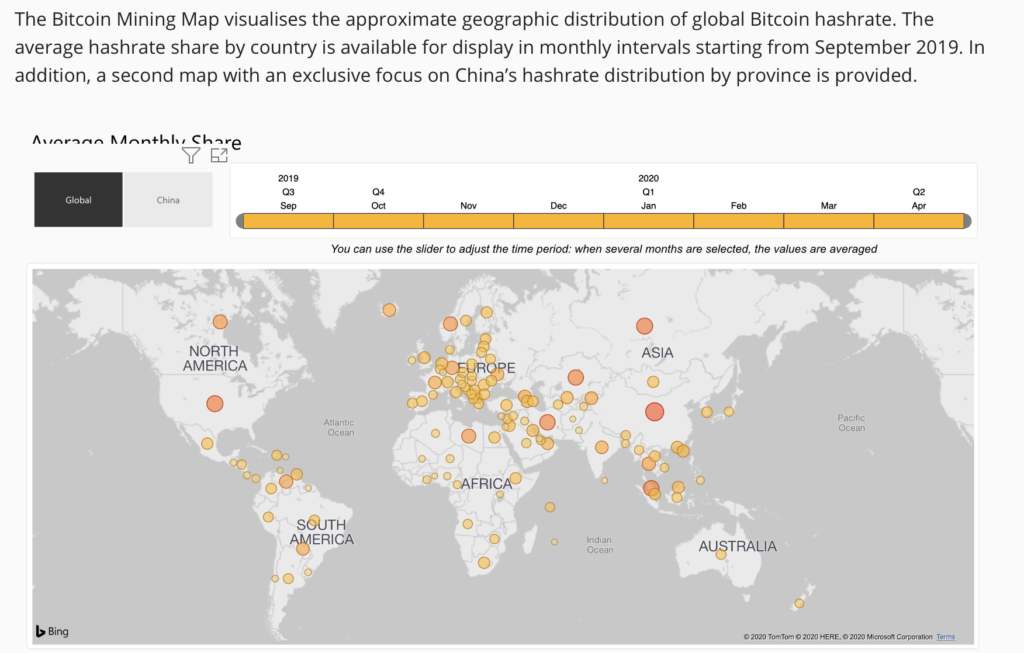 According to this, more than 65 percent of all computing capacity in China currently gathers to maintain Bitcoin’s network. From an economic point of view, this results from the general conditions: Electricity in China is comparatively cheap, making mining at BTC profitable. Other important locations for Bitcoin Mining with business intentions are far behind. Only in the USA, Russia and Kazakhstan are more than 5 percent of the hashrates located, and never even close to 10 percent.

2. China has gained an unstoppable lead in the development of ASICS. Almost all of these special computers used worldwide, which are designed for Bitcoin Mining and drive the hashrate in use, come from China. This, too, is fundamentally correct and includes further advantages for the Middle Kingdom. There, ASICs are cheaper because no import taxes are incurred, and the latest models are available earlier than elsewhere.

This situation in turn gives rise to two questions:

1. can China coordinate a 51 percent attack on Bitcoin?

Such an attack means that a warehouse will deliberately take over and manipulate BTC’s block chain. Theoretically, this would probably be possible. But a look at the distribution of hashrates in China shows The miners are spread out all over the regions and foreign investors are involved in the big mining pools. It is hard to imagine that they are all pulling together to launch a 51 percent attack on Bitcoin in order to provoke a crash that would also harm their own business.

2. Can China influence the price of BTC?

Due to the concentration of Bitcoin miners in China, the bulk of the new BTC is also being mined there. After the Bitcoin Mining of May, this amounts to around 900 BTC daily, of which China accounts for around 600. 900 BTC are currently worth a good 8 million US dollars. Even if they are all sold immediately – which, by the way, almost happens on some trading days – these sales represent much less than 1 percent of Bitcoin’s total daily trading volume. In-depth analyses of the influence of Bitcoin miners on the price of BTC also clearly show that the Chinese miners do not have the market power to substantially change the price of Bitcoin in their daily business.

Conclusion: China’s role in Bitcoin is not entirely harmless

If one follows the logic of economists, China cannot be interested in playing out its technically induced supremacy in Bitcoin. The resulting loss of confidence in BTC would in all likelihood cause the price to collapse permanently, which would destroy entire business models (Bitcoin miners, BTC exchanges, ASIC manufacturers, etc.).

China’s dominance in hash power is rather worrying for other reasons. The country is governed centrally and undemocratically. The Chinese Bitcoin industry could hardly escape orders from Beijing; the Corona crisis has shown how resolutely the communist leadership knows how to proceed. And China wants to launch its own state-supported Stablecoin. The preparations for this are well advanced. If the “E-Yuan” comes as a Central Bank Digital Currency (CBDC), the authoritarian system could take aggressive action against other Kryto currencies, some fear. These theorists see this as possibly having an associated impact on the hashrate of Bitcoin, and perhaps ultimately the price, as much more serious than the threat posed to BTC by the crypto industry from China.