The stablecoin TerraUSD (UST) has lost its 1:1 peg to the U.S. dollar for five days, stabilization measures have failed so far. Panic grips the algorithmically linked altcoin Terra (LUNA).

What happens when a stablecoin is no longer stable? The crypto scene currently experienced such a scary scenario with UST (TerraUSD). On Wednesday morning, UST traded at times below $0.25, far from the targeted parity 1:1 ratio from the US dollar. Had begun the crash over the weekend and on Monday started stabilization measures for UST have so far achieved no lasting success. UST was the third most valuable stablecoin in the world by market capitalization until the downtrend and UST is always backed by $10 billion in market capitalization. The situation is making waves. 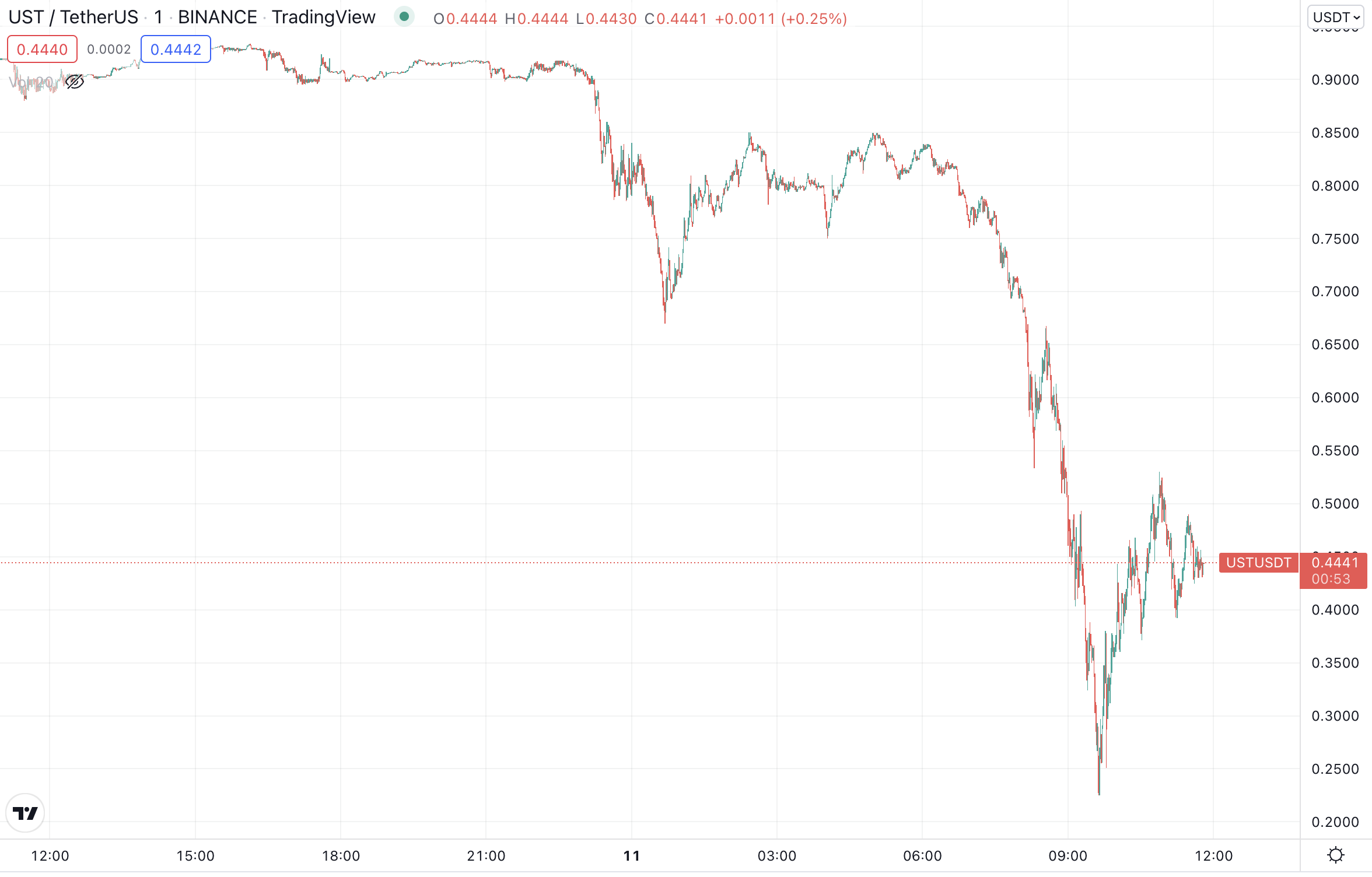 That’s because TerraUSD is algorithmically designed, unlike most other stablecoins. Instead of guaranteeing the peg to the U.S. dollar through monetary reserves, UST is supposed to be backed in theory by Terra (LUNA). But Terra has suffered an 86 percent drop in price in the last 24 hours alone, leaving LUNA with a market capitalization of only about $2 billion at the moment. Many observers believe that here the house of cards UST and LUNA just collapses in itself.

At the same time, it seemed at times on Tuesday as if the intervention of the Luna Foundation Guard (LFG) with 1.5 billion US dollars in favor of UST was taking effect. TerraUSD was able to reach levels above US$0.90 again for 12 hours, after all. Optimists said this laid the groundwork for the algorithm to re-settle between UST and LUNA. The world’s largest crypto exchange Binance suspended LUNA and UST withdrawals for six long hours, citing network congestion as the reason. However, all rescue attempts continue to have only short-term effects, and long ago the crisis at UST and Terra, which threatens the very existence of the exchange, also had a psychological impact on the crypto market as a whole.

A look at the cryptocharts shows red numbers almost everywhere, Bitcoin and the 50 most important Altcoin almost all had to cope with a minus of 15 percent and more in their price curves. Comparisons with the banking crisis that began in the U.S. in 2007 are making the rounds. But unlike the domino effects in the financial world at that time, no governments are willing to stop the conflagration with UST and Terra through protective shields.

The main man in charge of Terra’s ecosystem is founder and CEO Do Kwon. When UST faltered – slightly at first – on Saturday, Do Kwon was still making fun of concerned inquiries on his Twitter account. And when crypto celebrities publicly offered million-dollar bets against the concept of UST and LUNA in February, Do Kwon countered with a grand gesture. But now hopes of saving UST and Terra are focused on Do Kwon and Luna Foundation Guard (LFG). The foundation, however, has almost completely depleted its formerly $3.5 billion reserves, according to its publicly available cash book. Do Kwon, meanwhile, has been asking for patience on Twitter for more than 24 hours. He said he is working on a recovery plan. 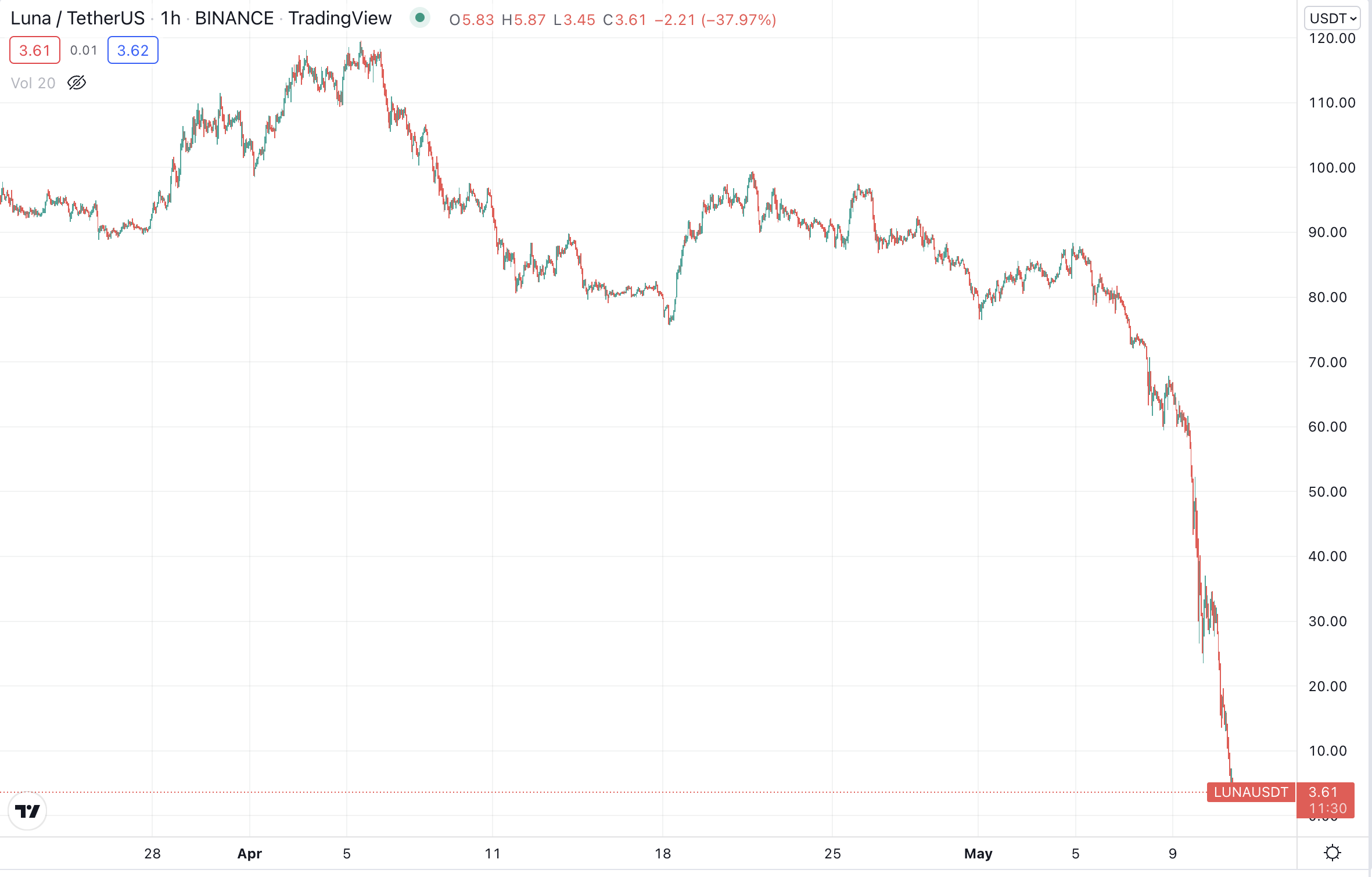 Conclusion: UST and LUNA implode – can decline be stopped?

The psychology of the markets will likely be of little help in any renewed rescue attempt for UST and LUNA. Investors are fleeing the stablecoin just as they are fleeing the altcoin that was actually put over. Even investors not directly affected are seriously worried – whether justifiably or not – about what other chain reactions the crash of TerraUSD and Terra could trigger. It is a black moment in crypto history, the outcome and reverberations of which still seem to be in the balance.