Bitcoin (BTC) is approaching its all-time high of 2017/18 at USD 20,000 – and yet a closer look at the crypto market reveals a crucial difference compared to three years ago: This time, the Altcoins can profit much less from the bull market at BTC.

In December 2017, Bitcoin (BTC) became the topic of the day with an all-time high of around USD 20,000. And this week it seems that Bitcoin is about to pulverize its previous record. But a somewhat differentiated market analysis shows: The history of Bitcoin does not repeat itself simply, but this time BTC dominates the total market for crypto currencies still much more clearly.

At the turn of the year 2017/18, there were about 1,500 Altcoins competing with Bitcoin for the favor of investors. At that time, Bitcoin was able to gather a good 50 percent of the total market capitalization of a good 500 billion US dollars behind it. Today, the volume of the overall market has hardly changed. But Bitcoin secures a larger share of the cake with a dominance of about 65 percent – even though CoinMarketCap, for example, lists a good 7,700 Altcoins as alternatives to BTC. 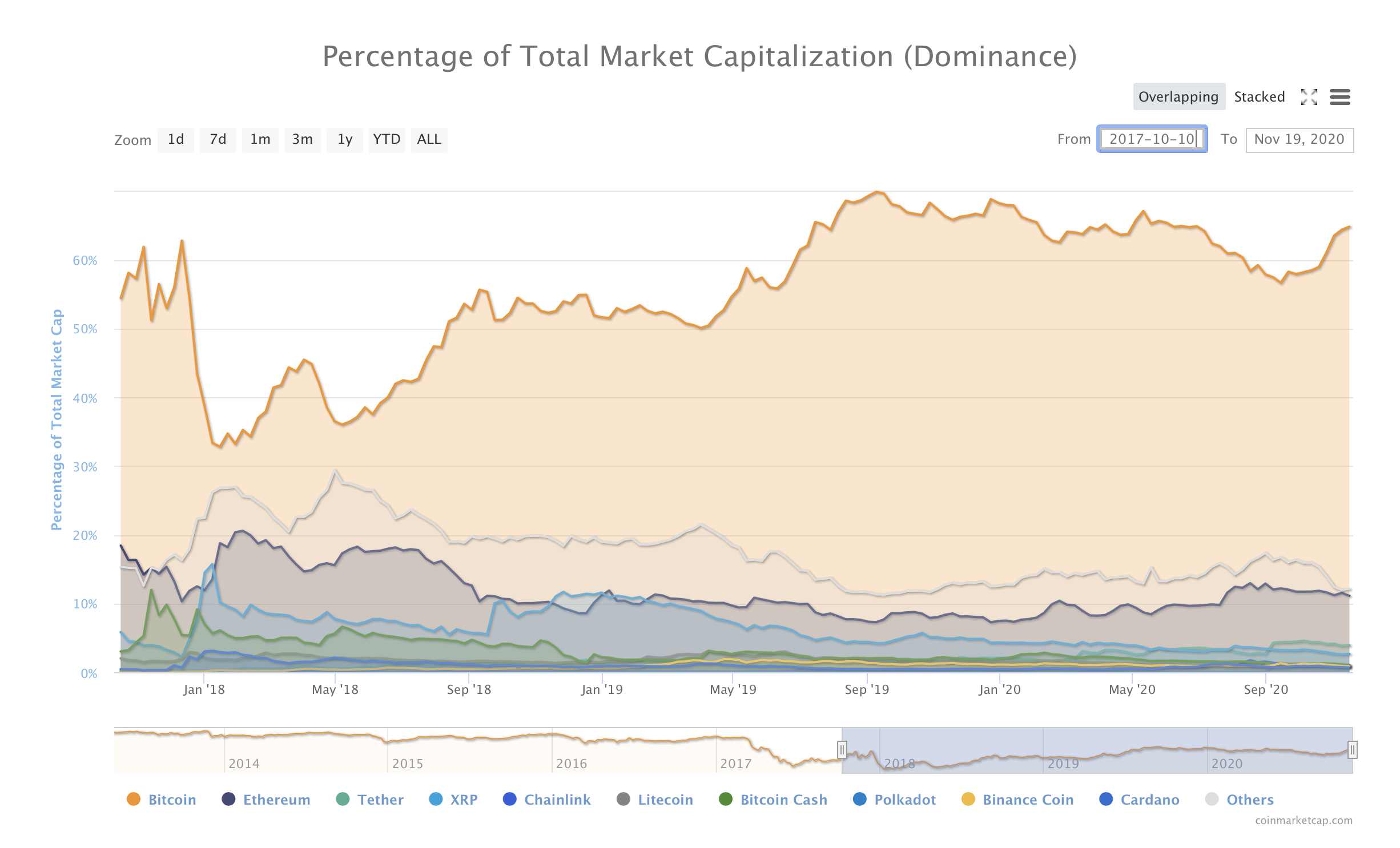 The comparison of the two Bitcoin booms of late 2017 and today in 2020 thus clearly shows the difference: If BTC now climbs to an all-time high again, the Altcoins will lag far behind. Ethereum (ETH) is still doing respectably, but at 470 US dollars, ETH is far from the 800 US dollars it had in December 2017. Ripple (XRP) as the third most important crypto currency is already lagging behind historical developments by a factor of four. At IOTA, one of the darlings of the German crypto scene, the situation is even more dramatic. IOTA is bobbing around 0.25 US dollars, is not at all affected by the new Bitcoin boom, and investors look back sobbing at the 4 US dollars that IOTA was worth at the end of 2017.

The game can basically be repeated with any Altcoin. One exception is the Stablecoin Tether (USDT), which in 2017/18 accounted for only 0.20 percent of the capitalization of the overall market and today, at almost 4 percent, plays a significantly important role. However, as a stablecoin, tether is subject to minimal price fluctuations and is not itself an instrument for value growth. So what does the current market situation teach us? “The Winner Takes It All” was sung by ABBA in 1980 and the phrase has become commonplace when it comes to describing predictable effects. The winner takes it all, whether in poker or for pioneers in online business – and so Bitcoin is currently triumphing.

Bitcoin was established with many as synonym for crypto currencies and binds the capital, which is in the market and flows freshly to the crypto stock exchanges. There even prominent Altcoins can become still so loudly with “technological superiority” or fascinating applications in the real economy – investors remain rock solid with the classic Bitcoin and the tendency even still strengthened.

Result: Bitcoin for the majority of investors without alternative

The Altcoins had three years to demonstrate their advantages over Bitcoin – and they failed to do so when looking at the market data. Thus remains to be held up to date: To be on board at the recent Bitcoin Rally, BTC itself is by far the most convincing option. It seems more questionable than ever whether even established Altcoins will still succeed in attaching themselves to the bull ride of Bitcoin. That was different in 2017/8. By the way, we have recently listed the reasons why pretty much everything speaks in favour of Bitcoin here.