The sacking of IOTA CEO David Sønstebø was supposed to be a fresh start. But data and news about IOTA prove it: The project seems to be steadily losing momentum.

IOTA wanted to enter 2021 with renewed vigor after firing co-founder and CEO David Sønstebø had been fired in mid-December 2020. From the technology side, the completion of IOTA 1.5 aka Chrysalis is urgently on the agenda and February is the announced date on the calendar. But once again, critics are disrupting the improving mood at IOTA. The investigative anonymous “Hund”, for example, shows graphs on Twitter that suggest: Professional interest in IOTA is waning.

“Hund” picked out three indicators (all charts by IOTAarchive.com). First, he looked at the number of patents in which IOTA is mentioned. According to this, until the middle of 2020, there were up to a good 20 patents a month in which IOTA played a role, and IOTA was particularly important in this regard in 2018. Now, however, the number of IOTA patents is falling continuously and has even amounted to zero in recent months. 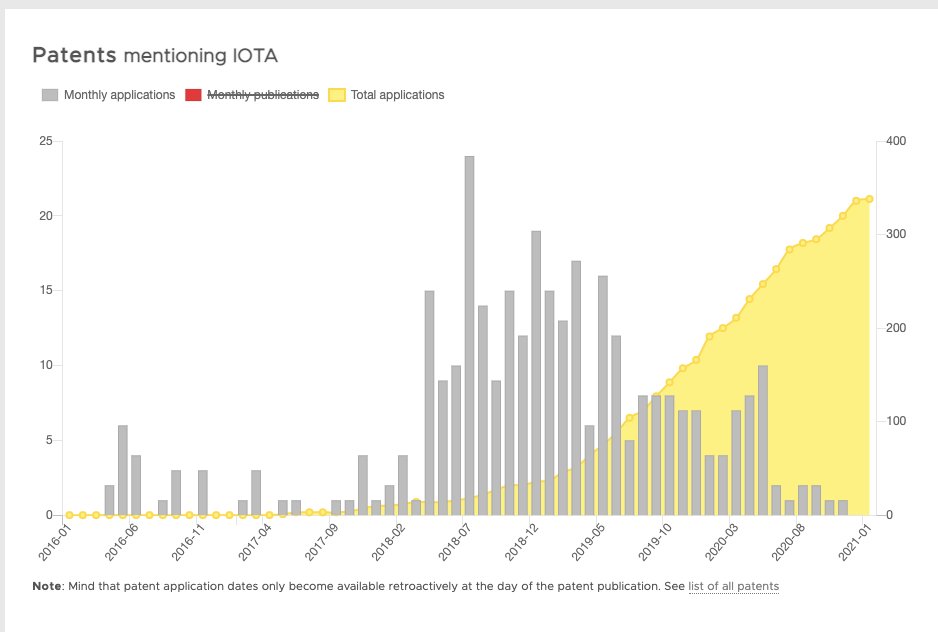 The trend is similar for academic publications that (partly) deal with IOTA. There, too, the number of publications has plummeted in the last months and amounts to only 12 to 14. At other times, IOTA was happy about more input and feedback from the academic community and more than 30 publications per month were counted. 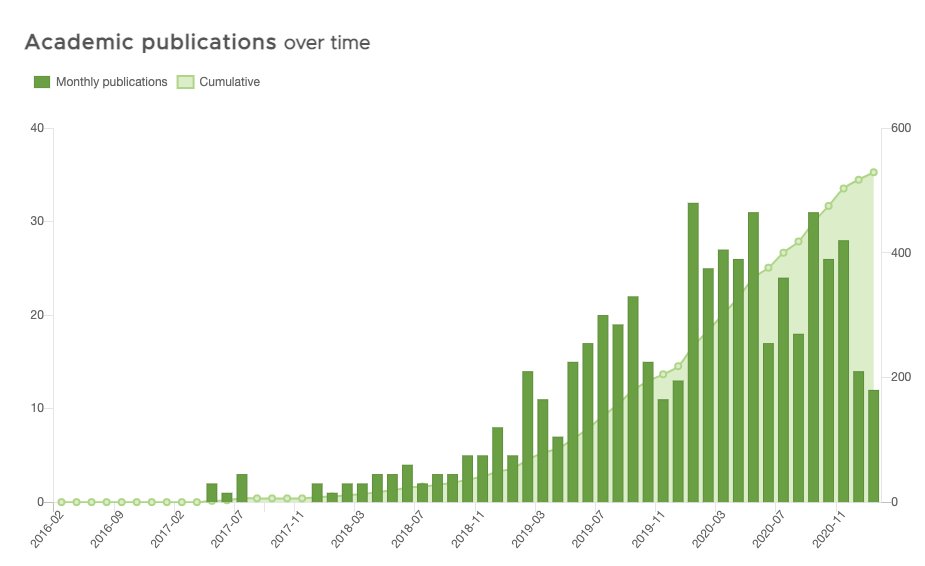 Third clue for the downward trend with IOTA is according to “Hund” the number of the news, which describe IOTA projects and their progress. Here, in good times, one could follow around 90 tangible news about IOTA per month and now sees a curve that bends towards 30. 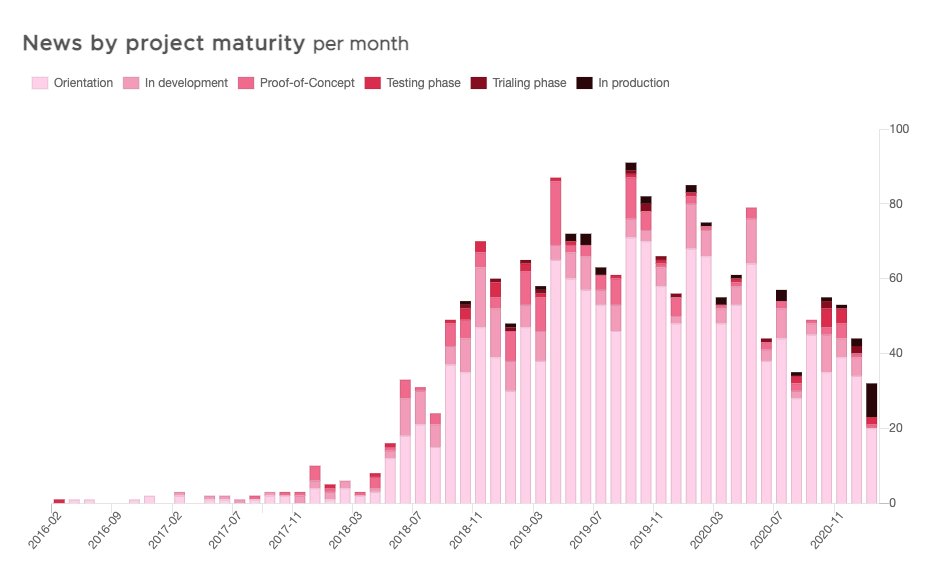 Interest in IOTA in a nosedive

But you don’t even have to believe “Hund,” who is predominantly antagonized in the IOTA community and whose revelations and inquiries at the IOTA Foundation are officially met with iron silence – this time, too, by the way.

After all, anyone can see for themselves using simple analytics tools like Google Trends. At the end of 2017, during the first Bitcoin boom, IOTA was even more in demand than Ethereum (ETH) for German Google users. But then the interest in IOTA already plummeted drastically and is now clearly outstripped by Ethereum. 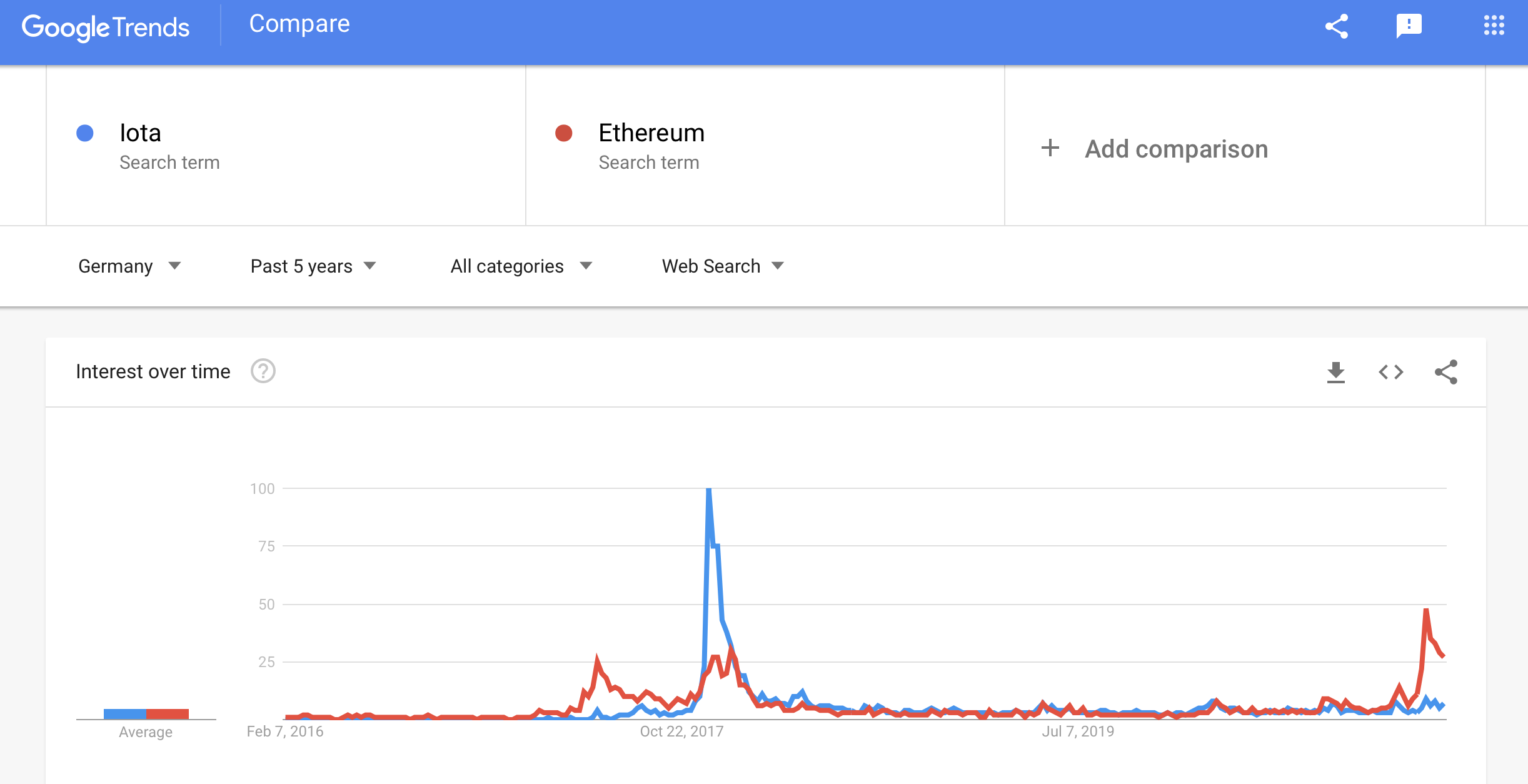 We can also look to Blocktrainer, whose German-language YouTube videos are an important part of the local crypto scene. Blocktrainer namely recently explained why he no longer wants to deal with IOTA. He puts IOTA in the group of “durable” projects and his former enthusiasm has cooled down. Blocktrainer emphasizes: from big announcements at IOTA, with which he has dealt in detail from the technological side for years, “actually nothing at all has been implemented”.

Conclusion: IOTA is threatened with relegation

It is a pity enough that IOTA loses an expert and independent companion in Blocktrainer. Afterwards he had to experience hostilities from IOTA fans, partly far below the belt. A phenomenon that we also know. According to good journalistic practice, we will of course also present you with progress reports on IOTA. However, in the annual review 2020, weaknesses of IOTA become clear and also from the perspective of investors we have to come to the conclusion: At the moment, IOTA is not a good investment.

Finally, a look at the price curve: The highs of IOTA at the turn of the year 2017/8 with values of over 4 US dollars are long gone and the momentum led by Bitcoin is only priced in for IOTA to a small extent by the markets. Thus, the once highly praised project is now not even in the TOP 30 of the most important cryptocurrencies by market capitalization and IOTA is trading at just over 0.4 US dollars, which can hardly satisfy any investor thinking in the medium or long term. Compared to soccer: The proud traditional club IOTA has internally torn itself apart to such an extent that it has already been relegated to the second division and is in danger of being passed through further.