Ripple expects to be sued by the US Securities and Exchange Commission (SEC) these days. This revolves around whether XRP must be classified as a security token subject to approval. There is a threat of heavy penalties.

For years now, there have been doubts as to whether Ripple proceeded legally under US law with the issuance and sale of XRP. Now the situation is coming to a head, because the powerful Securities and Exchange Commission (SEC) apparently wants to sue Ripple. Ripple CEO Brad Garlinghouse made this public via Twitter and interview. The SEC, as the U.S. Securities and Exchange Commission, has already identified several crypto projects as securities after launch in the past and forced them to pay penalties and compensation. Garlinghouse sees the SEC’s action against Ripple (XRP) as an attack on the entire US crypto industry. The price of XRP lost more than 15 percent, trading below $0.50 for the first time in weeks. 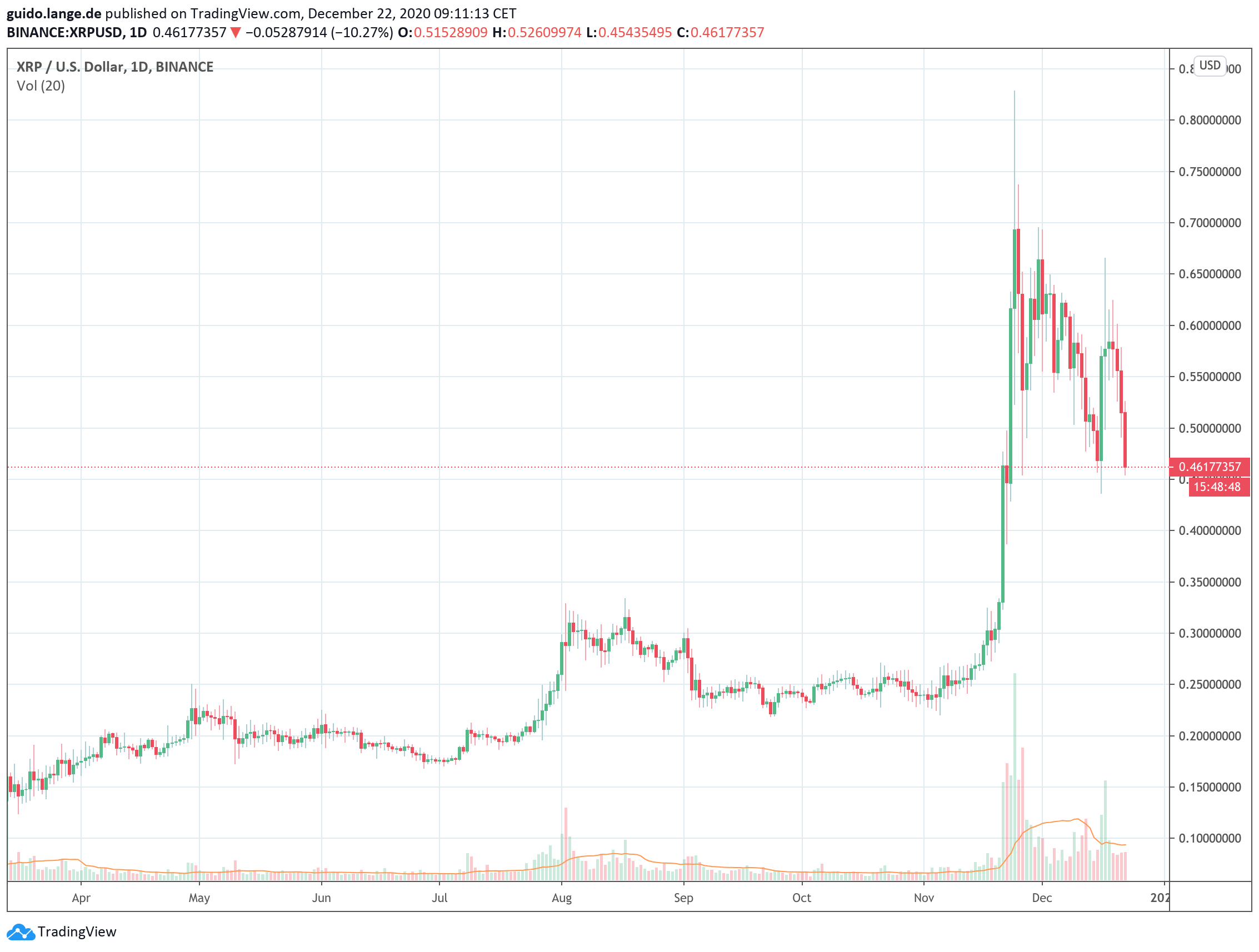 One point in particular is currently infuriating Garlinghouse: SEC head Jay Clayton will lose his post with the inauguration of the new U.S. President John Biden announced at the end of January. To initiate a lawsuit shortly before Christmas and then later not to answer for it – Ripple finds that simply unfair. Garlinghouse expects that with Biden after Trump, more openness from official bodies for the crypto industry will return to the US. The SEC has not yet commented on or denied the possible indictment.

The question of whether a cryptocurrency should be considered a security returns regularly. The Crypto Rating Council as an independent industry association gives XRP a rating of four, which means a high probability of being classified as a security. Ripple, on the other hand, denies this tendency and had influential lawyers in place to support its position over the summer.

Securities are subject to registration in the U.S., just like stocks. When Ripple generated 100 billion XRP and sold parts of them, investors would have basically bought shares in Ripple, also think disappointed investors. These have already filed several class action lawsuits against Ripple, the outcome of which could be affected with a verdict from the SEC. Most recently, Ripple had loudly thought about an emigration from the USA because of the situation.

In a recent position paper, Ripple compares itself to Bitcoin (BTC) and Ethereum (ETH). These two cryptocurrencies, the largest before Ripple, have been given the green light by the SEC as non-securities. Ripple also makes an emotional national argument with the slanted claim that BTC and ETH are controlled by China. By penalizing XRP, the U.S. will strategically damage itself, rings through.

Conclusion: the air is getting thin for Ripple

No one at Ripple can credibly say that the SEC’s move would come as a surprise. The possible classification of XRP as security has been hanging over the Ripple project like a sword of Damocles for quite some time. Other major cryptocurrencies like EOS were able to avoid lengthy lawsuits in the end by settling out of court. Whether such opportunities can also arise for Ripple can only be assessed from the formal indictment. The market does not like the uncertainty and therefore sent XRP into the red for the time being.