Ethereum (ETH) is undisputedly the second most important cryptocurrency worldwide after Bitcoin (BTC). Now that Bitcoin is hitting one all-time high after another, is it worth investing in Ethereum?

On Friday night, Bitcoin (BTC) briefly cracked the magical $40,000 mark, recording a new all-time high (ATH) in its history. Somewhat overshadowed by this success story is Ethereum (ETH), the largely unrivaled number two behind Bitcoin on the global crypto market in terms of capitalization and importance. So investors are asking: does it make sense to extend investments in cryptocurrencies to Ethereum as well, or should one limit oneself to Bitcoin? We explain important current arguments in this discussion:

Ethereum was never conceived as a direct competitor to Bitcoin. Rather, ETH inventor Vitalik Buterin has intended Ethereum to be a cryptocurrency since 2014, establishing it as a money substitute in its own ecosystem. Ethereum, for example, allows smart contracts to be concluded in its blockchain, i.e. automated and mandatory contracts. This function also comes into play when Ethereum is used in so-called DApps, online applications ranging from poker games to decentralized crypto exchanges. Bitcoin does not directly support smart contracts or DApps in its blockchain.

Currently, most of the public attention is focused on Bitcoin. This can be explained by peak prices and these in turn result from the fact that Bitcoin is more and more understood by institutions and large companies as a store of value. Bitcoin as “digital gold” can be used to store assets in an inflation-proof manner, is the motivation for shifting cash reserves into BTC. The use cases and purposes of Ethereum are more complex and therefore not so well suited for presentation to a mass audience so far. On the crypto scene, however, experts continue to fill Ethereum’s ecosystem with new ideas, cementing ETH’s status as a weighty alternative or complement to BTC.

In the past year, the DeFi division has emerged from its infancy in the crypto industry. DeFi stands for Decentralized Finances, and behind it is the concept of handling financial transactions in a tamper-proof manner without an intermediary. Thus, DeFi saves fees and time compared to the processes in the traditional financial world. Because Ethereum, with its smart contracts and large market capitalization, is ideally suited for DeFi, well-known DeFi projects like Uniswap are usually based on ETH and related ERC-20 tokens. The optimism that predicts a prosperous future for Ethereum, including a significant increase in value, is built on this situation.

But there are also understandable reasons why Ethereum and DeFi are nowhere near as mainstream as Bitcoin, with its clear-cut purpose as a store of value. When 2020 revenues and deposited capital reached new record highs at DeFi, vulnerabilities became uncomfortably apparent. In projects such as YAM or Harvest Finance (FARM), programming errors in the smart contracts caused losses in the millions. Investors thus painfully understood: DeFi requires expertise and considerable trust in the diligence of providers. Setbacks in DeFi are rubbing off on Ethereum.

And the DeFi boom also revealed arguably Ethereum’s biggest problem. That’s because in order to transact with ETH, you have to pay gas-called fees. Ethereum’s blockchain, which has been used so far, is only capable of handling up to 15 transactions per second. This capacity is actually not enough to handle DeFi’s skyrocketing demands. As a result, Ethereum’s fees (gas) have risen dramatically, sometimes reaching triple digits in U.S. dollar terms to execute a smart contract. The fee system on Ethereum favors highest bidders for fast unlocking of transactions – and therefore makes many trades in ETH less attractive to small investors.

But Ethereum has definitely foreseen this development and therefore started to prepare for a far-reaching technological transition years ago. Ethereum’s blockchain is to say goodbye to the underperforming Proof-of-Work principle. PoW is also the protocol in the Bitcoin blockchain, but the lack of scalability is less important there because only transfers in BTC have to be organized and not numerous other tasks like in ETH. Under the project name Ethereum 2.0, ETH is supposed to switch from PoW to Proof-of-Stake and the blockchain will then process up to 100,000 transactions per second. This would then also ensure lower fees again.

The official go-ahead for Ethereum 2.0 was given on December 1, 2020, and the switch is now to be completed in stages. This process involves technological uncertainties and, even if everything goes well, will not find its way to the finish line until the end of 2021 at the earliest. Until then, Ethereum will have to live with the minus point of having a compelling story, admittedly from the idea and development so far. However, ETH’s PoW blockchain as a bottleneck is hindering the further spread of Ethereum (and DeFi) and the planned upheaval is the biggest risk factor for ETH. If the upgrade to Ethereum 2.0 does not succeed in the foreseeable future, or if there are even security breaches in the process, ETH’s image as a pioneer for DeFi, smart contracts, and DApps will also suffer cracks.

This week, Ethereum cleared the psychologically important hurdle of 1,000 US dollars per ETH for the first time since January 2018. In U.S. dollar terms, however, Ethereum remains at its all-time high of 2018, which is just over US$1,400. However, Ethereum can currently boast an all-time high in terms of market capitalization; ETH is now backed by more than 130 billion US dollars. 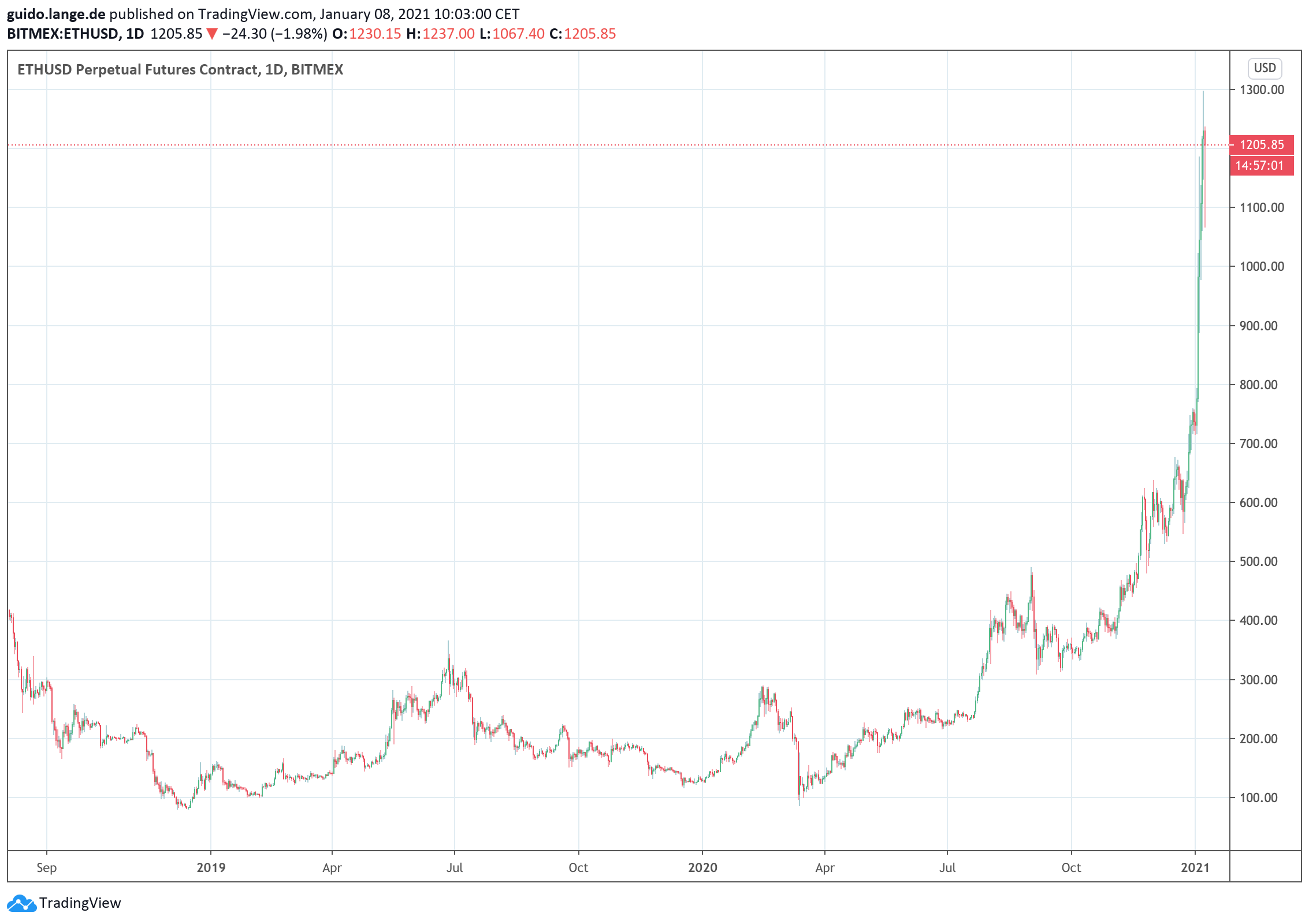 For serious investors in cryptocurrencies, however, the US dollar as a comparison currency is only of limited significance. If you take a closer look, you have to include the comparison of Ethereum and other altcoins in the price development to Bitcoin at least as a second benchmark. After all, Bitcoin is the undisputed leading currency on the crypto market. When comparing Ethereum to Bitcoin, ETH does not look bad from a historical perspective: At times, ETH beat BTC in its price performance. However, Ethereum has not yet been able to replicate the bull run that Bitcoin is currently demonstrating, and we have explained the reasons for this to you.

Conclusion: Ethereum as an investment opportunity with fundamental differences to Bitcoin

The good news is that Ethereum did not and does not want to become “digital gold”, leaving the arguably hopeless competition with Bitcoin in the discipline as a store of value to other cryptocurrencies . With its own ecosystem and the growth market DeFi, Ethereum has its own profile, which demonstrates the benefits of cryptocurrencies in practice every day.

The bad news is that the rapid evolution of the crypto industry in general is showing Ethereum’s technological limitations in its current form. The evolution towards Ethereum 2.0 will determine future success and sustainable price development.

To put it casually: the chances are good that Ethereum will defend its own field and expand it through DeFi. Those who strategically plan investments in cryptocurrencies in the medium and long term are not ill-advised to include Ethereum in their portfolio alongside Bitcoin. With these two positions, the investment is indeed diversified and the prospects for profits are good for Ethereum and Bitcoin when viewed over longer periods of time – even if price corrections threaten in the short term due to an overheating of the market.