Bitcoin (BTC) is rushing from record to record – and should definitely not be confused with Bitcoin Cash (BCH). Because despite some similarities, the investment opportunities with Bitcoin Cash seem to be significantly lower.

In early January 2021, Bitcoin (BTC) is hitting new all-time highs almost daily, most recently taking the $37,000 per BTC mark seemingly effortlessly. In this gold-rush mood, some investors are looking for more cryptocurrencies in which they sense profit opportunities. A good 90 cryptocurrencies are listed on trading platforms that have the word “Bitcoin” in their names. According to market capitalization, Bitcoin Cash (BCH) is the most important after the original. But beware: there are good and understandable reasons why the success story of BTC is not automatically repeated for Bitcoin Cash. We’ll explain why: 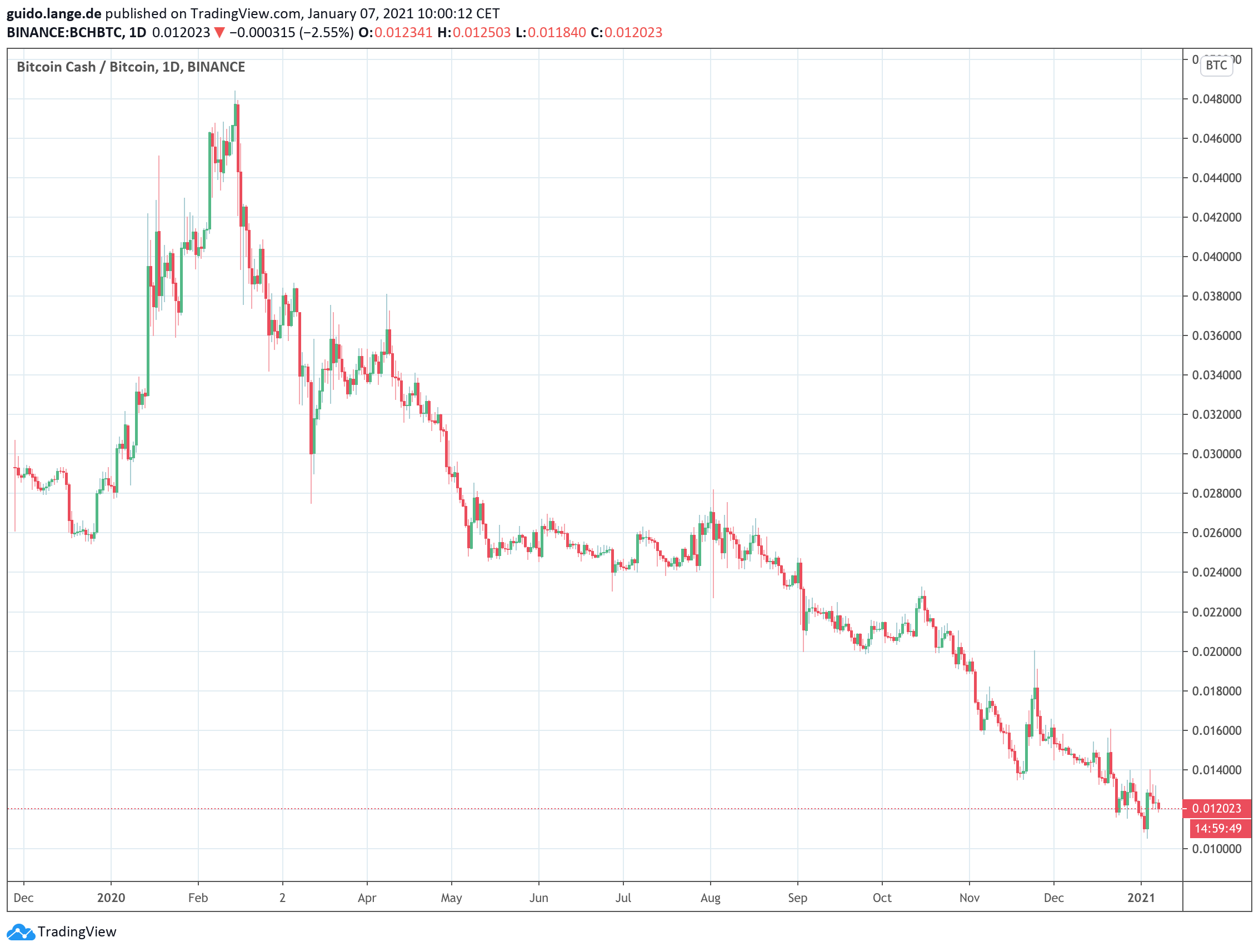 The most meaningful benchmark in the competition between cryptocurrencies is the medium- and long-term price performance compared to Bitcoin. And here Bitcoin Cash has continuously lost value. In other words, those who invested money in Bitcoin Cash were able to realize profits in euro or US dollar terms under certain circumstances. But those who would have opted for Bitcoin as an investment right away should now enjoy significantly higher profits, the size of which depends on the timing of the investment. A little food for thought: Bitcoin Cash’s historic all-time high dates back to December 2017 and was a good $4,000; today, BCH is trading at just under $450. Bitcoin also has an all-time high of just under 20,000 US dollars to report for December 2017 – but today stands at well over 30,000 US dollars.

Thus, many suggest that Bitcoin Cash’s train has sailed as a competitor to Bitcoin. BCH has never found a clearly defined use case or purpose in practice, whereas the “digital gold” BTC has. And when it comes to the idea of becoming an online means of payment, Bitcoin Cash has not achieved the spread that its competitor Litecoin (LTC) has.

Bitcoin: the original beats the imitators

If you are now getting into crypto trading or considering investing in cryptocurrencies, as mentioned at the beginning, you will come across many coins where “Bitcoin” is part of the name. Among them are windy imitators like Bitcoin POS. But let me tell you: In the now twelve-year history of cryptocurrencies, no other project has managed to even come close to the significance of the original Bitcoin. This is listed under the abbreviation BTC. Almost 70 percent of all capital stored in cryptocurrencies gathers there, which in turn guarantees constant liquidity and fairly formed market prices. BCH for Bitcoin Cash is indeed an established cryptocurrency and has recently been supported by PayPal. But in all likelihood, BCH will no longer be able to take first place from the real and first Bitcoin. For the reasons described above, Bitcoin without the name suffix embodies the far better investment opportunities.