XRP, Ripple’s cryptocurrency, has been struggling with legal problems and price losses. Is this perhaps the right moment to buy XRP at record low prices? We think “no” and explain why.

Once again, Bitcoin (BTC) is experiencing its next all-time high with a price of over $35,000. As a result, more and more citizens are interested in investing in cryptocurrencies. The attention quickly falls on Ripple (XRP), until a few days ago the number three among the most important cryptocurrencies by market capitalization. Ripple’s idea: to make international payments faster and cheaper with the help of XRP as a bridge currency. However, not everything is going as smoothly with Ripple and XRP as investors might think at first glance. We give you eight reasons why an investment in XRP is not advisable under current circumstances:

1. The powerful US Securities and Exchange Commission (SEC) has sued Ripple over XRP. In the room are damage payments of more than 1 billion US dollars. The accusation: Ripple has sold XRP without permission. For such securities (which XRP is presumably, the question is at least in the room) but would have to be obtained under U.S. law approval and stock exchange prospectus. Ripple rejects the accusations and seems ready to engage in a possibly years-long legal battle. XRP suffers from the uncertainties and shows a negative price curve, while Bitcoin and other leading cryptocurrencies like Ethereum (ETH) rush from record to record.

2. XRP poses significant inflation risks. More than 50 percent of all XRP is still owned by Ripple. 100 billion XRP were once generated, a maximum of 1 billion XRP Ripple is allowed to sell per month according to its voluntary commitment. In addition, there are large amounts of XRP that Ripple co-founder Jed McCaleb is entitled to after his retirement, which he is systematically shedding. This creates a situation where the supply of XRP continues to rise and demand cannot keep up.

3. When XRP was launched by Ripple in 2013, digital currencies were still uncharted territory. The advantages of automated money transfers in seconds and at very low fees actually seemed like a revolutionary alternative to the existing systems of the traditional banking world such as SWIFT. The major US bank JP Morgan, for example, also recognized this and launched its own stablecoin for its customers. XRP remained on the sidelines. In the meantime, central banks around the world are discussing the issuance of government-backed digital currencies (CBDC), including the ECB about an e-euro. XRP cannot benefit from the development, but has to watch how its concept comes under increasing pressure.

4. The public equation of Ripple and XRP is problematic. Because Ripple does find customers, more than 300 already have. But only 10 percent of financial institutions and financial service providers that rely on technology from Ripple also used XRP in the process. Even flagship customer MoneyGram, in which Ripple became a shareholder in 2019, additionally charges Ripple for the use of XRP for international money transfers. Internally, MoneyGram says that the combination of Ripple and XRP is not at all cheaper than alternatives. In short, the original concept of Ripple with XRP has not been able to establish itself in the traditional financial world as hoped.

5. Ripple already wants to change course and introduce XRP to private customers as a means of payment in the online world. That’s where the SEC’s accusations are poison. Major crypto exchanges like Coinbase have started to delist XRP (mostly in the US for now). In its home market of the U.S., Ripple and XRP are running out of trading venues. PayPal has dropped support for XRP altogether for its new crypto division. The dispute between SEC and Ripple over XRP weighs on confidence and price performance.

6. XRP is currently quoted at around 0.20 U.S. dollars and has negatively decoupled from the development of the overall market of Bitcoin and Co. Viewed in euros or U.S. dollars, XRP is currently back at a level of 2018, where other cryptocurrencies posted a plus of several 100 percent in the same period. Compared to Bitcoin, the disappointing price development becomes abundantly clear: In the currency pair XRP/BTC, Ripple is now trading at an all-time low. So it would have been more lucrative to buy Bitcoin instead of XRP at any point in the last few years. 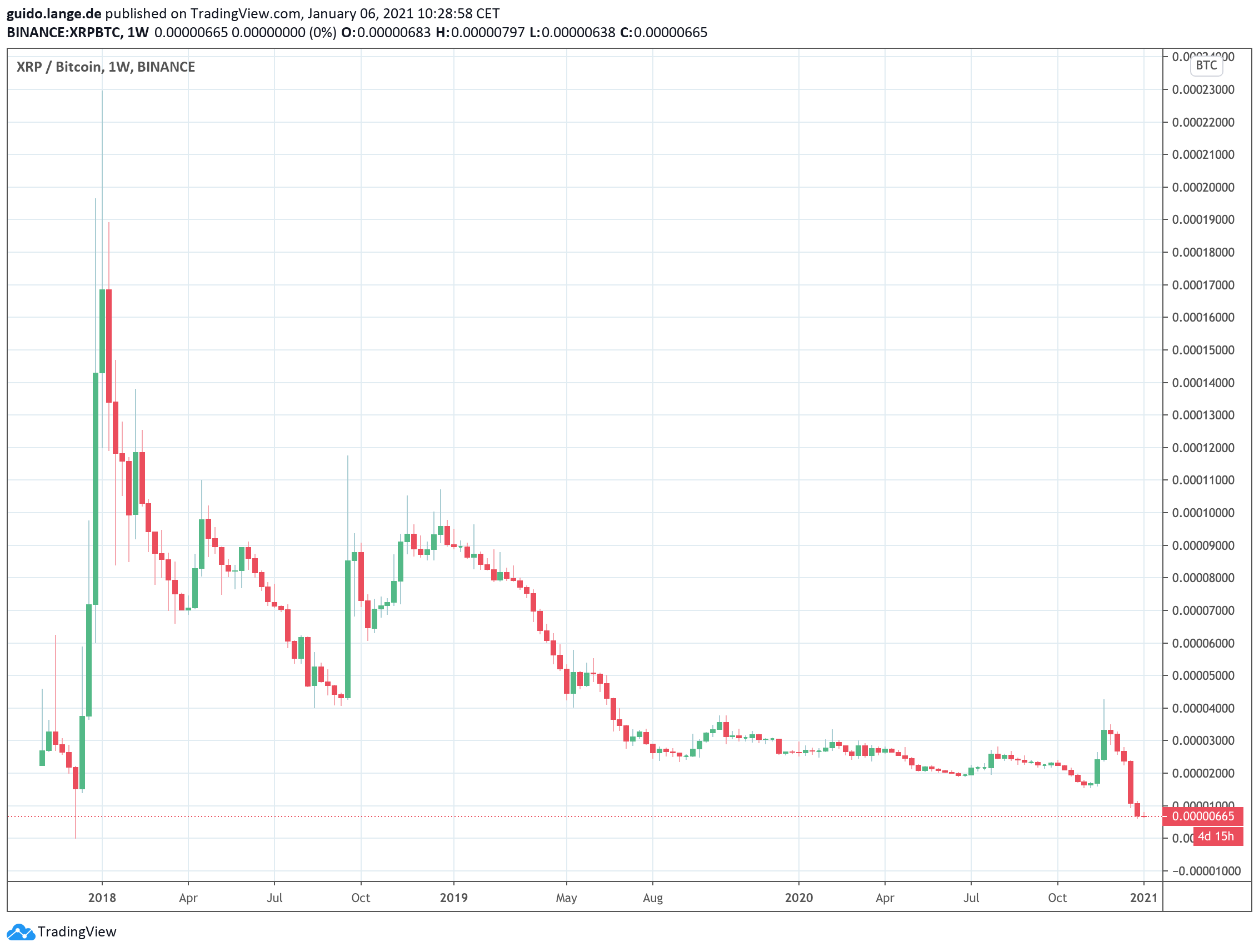 7. In addition to the SEC, disappointed early investors are also suing Ripple, and several class action lawsuits are pending. Again, this is over alleged misleading information provided by Ripple when selling XRP. The latest legal front has opened capital investors against Ripple, which still wanted to make Ripple ready for the stock exchange in December 2019 with a $ 200 million round of financing. In light of the SEC lawsuit, these investors also want their money back, citing a relevant clause in the contract that is supposed to allow XRP’s regulatory risk as a reason to exit.

8. However, stock exchange plans of Ripple seem to be put on hold anyway, even the migration of Ripple from the U.S. is being considered by the top management. But even in a positive scenario – Ripple resolves its legal disputes and successfully goes public – what’s in it for XRP? Probably nothing at all. Because while XRP and Ripple are always mentioned in the same breath, XRP has long been Ripple’s problem child and Achilles heel. In an IPO, the two independent systems would certainly be separated from each other. Those who hold XRP would therefore not profit from a possible success of Ripple even then.

Optimists argue with XRP that with the DeFi platform Flare and the associated token Spark, a promising project is waiting in the wings. Indeed, the idea of a new field of operation attracted investors through a spectacular airdrop of Spark for XRP and brought XRP from mid-November 2020 for a few weeks into the plus. But the gains have long since evaporated and the sword of Damocles, SEC, dominates the forecasts for Ripple and XRP.

Ripple may yet decide to try its luck with a new, legal stablecoin based on its recognized technology. Investors with balances in XRP, however, would have nothing even from such a move. We don’t see a comeback in sight for XRP and see the altcoin withering away to a speculation object. In order to defy the inflation risks of the euro and other fiat currencies in the medium and long term, Bitcoin and future-oriented stocks such as Google (Alphabet), Tesla or Amazon offered much better investment opportunities than XRP.