IOTA, with its foundation headquarters in Berlin, is attracting particular interest among German investors. However, the project is in trouble and the price of IOTA has been treading water for a long time. We explain why an investment in IOTA is currently not worthwhile.

Bitcoin (BTC) as a symbol for successful cryptocurrencies is once again the talk of the town and in this wake investors are increasingly interested in alternative coins. IOTA is often mentioned, especially in German-language media. This is because the IOTA Foundation behind the project is registered in Berlin and the idea of IOTA also has its appeal: in the Internet of Things (IoT), IOTA wants to serve as a standard for networking and digital currency. However, while IoT devices have long since moved into private smart homes, IOTA is struggling with stagnation and internal problems. We advise against investing in IOTA right now and show you nine reasons why:

1. Unlike Bitcoin (BTC) and almost all other cryptocurrencies, IOTA is not organized in a decentralized manner. This means that a basic principle is not fulfilled. Decentralization guarantees that no one can exert influence on transfers, cash ledgers and contracts in the ecosystem of a cryptocurrency. This is organized technologically in a blockchain. In IOTA, instead of a blockchain, there is the so-called Tanglenet, in the center of which a coordinator makes transfers valid. The IOTA Foundation controls the coordinator. It can thus shut down the Tanglenet at any time, as has already happened several times. Theoretically, money transfers could also be stopped and changed by the coordinator. The IOTA Foundation is aware of this fundamental problem and has wanted to shut down the coordinator for many years under the project name Coordicide. However, this project, also known as IOTA 2.0, is still a long time coming and is technologically more difficult than initially thought.

2. Coordicide as an unfulfilled promise is just one example of the fact that schedules are not valid for IOTA. Currently, IOTA 1.5 is stuck in a time crunch as an interim step, with implementation most recently postponed until early 2021. We recall other projects such as the official IOTA Wallet, which were first significantly delayed and then still had security vulnerabilities. If IOTA’s roadmap is understood as a timetable, confidence in the development work is regularly disappointed. Add to that critics who believe: coordicide on IOTA could be technologically impossible.

3. IOTA’s founders are at odds. There were four heads who launched IOTA around 2015. Co-founder Sergey Ivancheglo (CFB) left the IOTA foundation already in the summer of 2019 in a dispute. Co-founder David Sønstebø was relieved of all offices in the IOTA Foundation against his will in December 2020. IOTA thus lost its expertise and mouthpiece. Remaining are co-founder Dominik Schiener, whose powers, enshrined in the IOTA Foundation’s bylaws, have long been unknown and worry skeptics. Co-founder number four, Serguei Popov, is hardly noticeable in public, but continues to sit on the board of IOTA. This mishmash does not bode well and proves through publicly fought controversies that it is a reason for IOTA’s reform gridlock.

4. IOTA’s price curve is barely moving. For almost two years, IOTA has been trading at around $0.30. The price is similar to that of a so-called stablecoin, i.e. a cryptocurrency that tracks a real currency such as the euro or the dollar. For investors, stablecoins are an important tool for implementing their strategies in day trading with cryptocurrencies. However, a stablecoin neither protects against inflation nor offers special profit opportunities. The barely existing price development of IOTA against the euro clearly demonstrates how the market is losing faith in IOTA.

5. The situation becomes even more dramatic if we put the price curve of IOTA in relation to Bitcoin. BTC is the undisputed leader among cryptocurrencies. When the price of Bitcoin rises, as it has for months now, it pulls the price of many altcoins up with it. With IOTA, however, this no longer happens and so IOTA to BTC has now reached an all-time low. In plain language: It would have been better to buy Bitcoin instead of IOTA at any point in the past years. 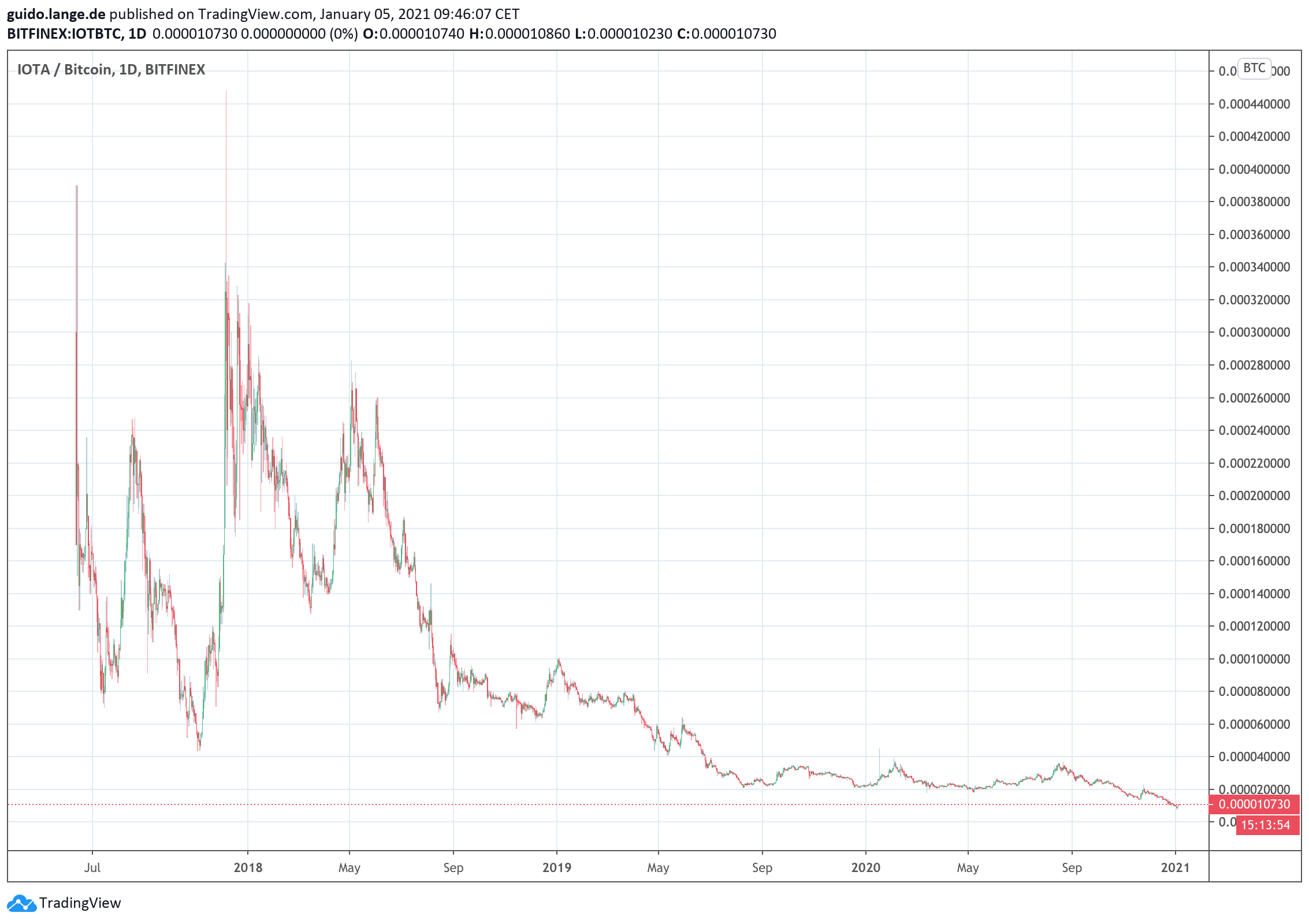 6. The status of the IOTA Foundation as a non-profit institution seems to be at risk. Possible insider trading, self-enrichment by IOTA founders, and suspected shortfalls in the IOTA Foundation’s finances are three of the reasons why it is far from certain that the IOTA Foundation will be allowed to remain a nonprofit. If the construct were to collapse, IOTA would lose its control center for development and collaborations. Leaks about IOTA repeatedly reveal that the founders are also afraid of a situation in which the foundation is officially stripped of its recognized and trust-building status.

7. IOTA as a cryptocurrency is losing ground and importance. After all, the smart move of the project was actually to provide technological network and means of payment in the growth area of IoT and become the standard. And at the EU level, for example, IOTA is succeeding in landing funding. But almost all of IOTA Foundation’s collaborations revolve around technological solutions, not IOTA as a digital currency. The dilemma is also reflected in IOTA dropping out of the top 30 most highly valued cryptocurrencies in 2020. The technology of IOTA has certain appeal, but just without IOTA as a monetary digital currency.

8. investors keep losing money on IOTA. In 2020, it was the hack of the Trinity wallet where investors lost money and the IOTA network had to be shut down for 1 month as a result. Transactions could not be made at that time. This was also far from the first incident involving the Trinity wallet.

9. Other long-time IOTA supporters such as Ralf Rottmann, who was on the IOTA board of directors, and Limo have also turned away from the project in the meantime.

No matter when you would have invested in Bitcoin in recent years: Your investment would be now clearly in the plus, with IOTA it would stagnate at +/-20 percent. The stock market is also booming again, reflecting the need for profit opportunities that offset inflation risks and zero interest rates. So why get into IOTA now, tying up capital? If IOTA manages to get on the road to success, there is then still the possibility to get financially involved there. Currently, however, IOTA is risky, that crypto year 2020 was anything but successful for IOTA.

The signs for IOTA are also rather negative for 2021. The technological need to catch up with other crypto projects is considerable and the internal problems do the rest to express considerable doubts about the future viability of IOTA. Despite all sympathy for the original and smart concept of IOTA: Investment opportunities are better found elsewhere, with success stories from the last year such as Bitcoin, Ethereum or even Tesla, Apple or Amazon, IOTA can no longer keep up for some time for the reasons mentioned.